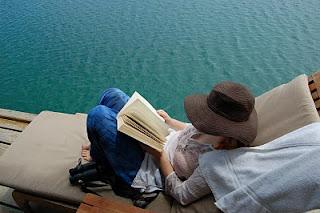 (enjoying Panama's rainy season)
If you were not already aware (and very few were) we've been away for a week. In Panama. It was a bird-watching thing, and a canal thing, and a beach thing, and a reading thing, and a no-computer thing, and a general "get the hell out of here for a bit" thing. We've been planning it for months, and then suddenly it happened, and it was really lovely. And one of the things that happened is that, in a small way, I started reading again. Not as much as I'd hoped for (I packed my allowed 8 lbs of books and only got through about 4 lbs of them), but enough that I'm going to have reviews for a couple of weeks, anyways.

The first book I read, started on the plane there, was Still Life by Louise Penny. This was a pick for my library-based genre book club, and of course fit the ticket as a mystery. Also, it's an award-winner, and it's Canadian. Plus, it helps greatly that I've been meaning to read this book for quite a while, and I'm very pleased to say that it doesn't disappoint.

The book, as many mysteries do, begins with a murder. It's a shocking murder because the victim was someone everyone loved, and even upon inspection appears to have been one of those genuinely good and decent people. There are red herrings, everyone's a suspect, and some are more suspicious than others. Chief Inspector Armand Gamache of the Surite du Quebec is called in with his team to investigate, and so begins Louise Penny's most excellent Three Pines Mystery series. This is a series that has been garnering a lot of attention in certain circles, and so I was really quite keen to introduce it to my adventuresome group of genre readers.

The characters, both the residents of the village of Three Pines in the Eastern Townships of Quebec and the police officers called in to investigate the murder, are generally fascinating. Some are much more likeable than others. The cast is large and varied, a great ensemble. Some of them were immensely, immediately likeable -- I particularly liked Gamache, and his deputy, and Myrna the bookshop owner. Some of them were exceedingly difficult; here I'm thinking of Agent Nichol, a detective trainee who refuses to be trained. Actually, I had a fair bit of trouble with her character in that she was almost -- almost -- unbelievably dense for someone who is supposed to be good enough to be included on Gamache's team. I don't know if she shows up further down the line, though I can't imagine that things are left with her the way they were. Her insistence on ignoring guidance and refusing to take responsibility, and her complete self-absorption, not to mention her complete inability to read people, seems almost pathological. I wondered if maybe it was, or if she was set up as a foil to the murderer, or both; at any rate, I felt it was maybe a bit overdone, in that while she seemed to have shades of grey at first she kept creeping further and further into something that was almost farcical.

The story is told from multiple viewpoints, often within the same paragraph. This can be a bit confusing, and occassionally I had to stop and wonder whose head I was in this time, and it's not always done particularly gracefully. Also, some of the philisophical discussions between characters, particularly towards the beginning of the book seems a bit long-winded and clumsy. That may partially have been me trying to get into the style of the book. Some of the later ones I thought were quite well done.

The mystery itself is really quite excellent. I had suspicions about most of the characters and it turned out that I was never actually on to the real killer; the red herrings are generally subtle though not always, and the clues do lead in the right direction if one picks up on them. It did not come completely out of left field. There's even a really masterful piece of misdirection midway through, but with that much of the book remaining one sort of figured it couldn't be over yet. I like that there is a definite showing of procedure; Gamache does some of the footwork, but he also does a lot of delegation. Some of the results of this we see, and some we don't. But we know that it's not just Gamache working on the murder case -- it's a whole team, which seems like it would be very true-to-life.

There's a fair bit going on in this book, mystery aside. There's marital strife, though a really beautiful relationship there, too. There's small-town community and the difficulties of it (though this book is generally much more positive on small towns than most Canadian fiction I've read). There's gay-bashing, there's art and discussions about what it is and is not, there's change and things not changing, maturity and immaturity. Being also that Three Pines is an Anglo village in Quebec, the book touches on the topic of Anglophone-Francophone relations, and I would be completely unsurprised if this series touches on that a fair bit more in the books ahead. The book is packed, and I'm looking forward to unpacking it tonight with the book club.

It's not exactly a standard cozy mystery, in that Jane Neal has a true personality and we actually do care that she was killed; and things are changed, forever, in Three Pines because of the murder. Those closest to Jane are going to be forever scarred, and some of them even damaged beyond repair. So it will be very interesting to see how this progresses in the next book of the series, A Fatal Grace.
Posted by Unknown at 8:18 AM

Glad to have you home. I can't wait to read about the other 3.5 lbs of books you read on vacation!

Indeed! It's nice to be home, I must admit. The trip was great, but I do enjoy my own mattress and my own tea.

What a picture of contentment you are!! Great review. I'm one of the few who doesn't care for the series. I read the first one and liked it, but I really didn't care for the next couple and stopped reading them.

I am interested to see, now, how the series progresses! I know she does have a lot of devotees, but my mother wasn't really happy with the last of the series, and she's felt it's kind of declined since the first one. But she was the first one who told me I should read them!