What Happens in London by Julia Quinn

In the interests of not having only ONE post in the month of May, I finished a book today! It actually wasn't a chore. It was quite delightful, and entertaining, and very light and sweet. But it also allows me to maintain my two books/month target, which is... well, not one book a week, but maybe we'll get up to three books next month?

This is a book from one of my go-to authors when I'm having trouble reading anything. This time it worked! I was a little worried; the last time I tried a Julia Quinn it was a DNF for me. But I think I might have been unduly influenced by being sandwiched on a plane home from a vacation.

But for me, this book was up there with my two Quinn favourites, The Lost Duke of Wyndham and An Offer from a Gentleman. In fact, it might... might... be better than either, though it would be hard pressed to top Lost Duke. It was a perfectly enjoyable regency romance, and it sparkled in a way that I've not found in too many other romance novels.

So, let's see. We have the stunning Olivia Bevelstoke, daughter of the Earl of Rutland, in London for the Season. Her new next door neighbour is Sir Harry Valentine, who is, unbeknownst to her (and most others) an operative and translator for the War Office. To society, Sir Harry is a rather mysterious figure, a baronet, very sober, very solitary, and not a lot of fun. Due to a nasty rumour, Olivia takes to spying on Sir Harry from her bedroom -- and of course, he notices. Needless to say, they don't really get off on the right foot.

The story is, of course, largely about Olivia and Harry getting back on the right foot.

What made this read so enjoyable for me was the interaction between Harry and Olivia. Both are flawed but ultimately lovely people, and they tweak each other in just the right ways to make the growth of their relationship believable and entertaining. They are hilarious together, to be honest, and I genuinely liked them individually and especially when they're sparring with each other. The things they goad each other about, the things they say to each other go from being superficial and not at all polite to a growing, deepening relationship that clearly means a lot to each. The book does rely a little bit on the physical attraction between the two to get them from high dudgeon to good friends, and the friendship does happen a little quickly; but Quinn makes it clear that each intrigues the other, gets under the other's skin, enough to make the fact that they salvage a friendship plausible.

All that aside, Quinn can write Society dialogue like no one else. It's not that her characters always know exactly the right thing to say, or always have a snappy comeback. No, it's that occasionally they do get mixed up or truculent or go silent, but they recover; and when they are on conversational form, they are a riot to observe. Even a discussion about the weather can be fraught with hidden meanings and emotion -- without being overwrought or overdeveloped.

As always, the climax was a wee bit melodramatic, and in this case I really didn't feel it was necessary. There was a villain but as in the best of her books the villain turns out to have hidden depth (I still didn't like him much, but I was somewhat convinced that he might be redeemable) and the relationship between Harry and Olivia didn't really need an extra shot in the arm, the way the climax often provides in romance novels. It was all there, and I would have believed in their Happily Ever After even without the events at the climax.

I really, really enjoyed myself throughout this book. I giggled out loud in places, the romance was sweet and genuine and satisfying, and the plot was (for a Quinn) generally understated and perfectly enjoyable. In fact, this may be one of the few romances I could seen picking up again and enjoying a second time through, so I'll be on the lookout for a copy of my own.
Posted by Unknown at 8:41 AM No comments:

We went on vacation. Last year, for this vacation, one of the days was a thunderstorm day. We spent the entirety of it ensconced in the camper, reading. It also helped that I was on antibiotics and miserable and not wanting to get out and hike, especially in the rain, so the reading felt like a reprieve. I read three books that day, for a total of five over the whole vacation.

This year I planned accordingly, and our combined reading material looked like this: 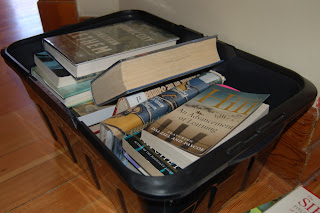 I remind you this is a five day trip, the overriding aim of which is hiking outdoors and watching birds (which was, I must say, extremely successful this year.)

I read one book. I read part of another one (Crocodile on the Sandbank, which turned out to be just on this side of too light for the brain, especially seeing as I knew exactly what was coming) and then switched to what turned out to be the perfect choice: the next Brother Cadfael mystery.

I have to confess, this is another book I'd started before and put back down again. For whatever reason, it just wasn't grabbing me, and I'll say right off the top that I don't think this is one of the best in this series I've read. That's not to say it's not thoroughly enjoyable. There were just a few things that stretched credibility well beyond my comfort zone this time.

The basic plot, without any spoilers: the abbey's annual Saint Peter's Fair is gearing up for what looks to be a successful year after a missed year due to the seige reported in One Corpse Too Many. However, the townsfolk, still struggling with major infrastructure problems after the battles, are unhappy that they see no direct part in the tithes and levies that come from the lucrative fair. When a visiting merchant strikes down one of the town's young men (an unfortunate, though not fatal, event) a riot breaks out. Brother Cadfael is, of course, in the thick of it. Then, later that night, the merchant goes missing and is found the next day, the victim of what appears to be a simple street robbery. But the pieces don't add up, some people know quite a lot more than they're telling, and the hunt is on for the perpetrators of the crime as the situation escalates.

As I commented to fishy at one point, I had the mystery (somewhat) solved by the time the murdered man was found, which is to say within the first fifty pages. This isn't ideal, with these books -- at least not in the way it happened here. The one I've enjoyed the most is One Corpse Too Many and that was in large part because I was completely in the dark about the murderer and even the motive for most of the book, despite the foreshadowing that was skillfully employed. I was still definitely in the dark about the motive on this one, as was our intrepid monk. What surprised me, though, and felt out of character, is that Brother Cadfael is normally so infallible at reading character -- and he missed this one completely even when I, as the reader, knew something was wrong. Same with the deputy sherrif, who is as sharp as one could hope in official law. Also, Brother Cadfael felt very much an observer rather than an active solver of this mystery, which also felt out of character. I don't think this is a problem with Cadfael so much as a problem with the plot and other characters, which points to it being an author misstep.

What I missed most, though, was the warmth of feeling I've had for many of the characters in these books in the past. I am not sure whether this was me, or the long break between this book and the last, or that the characters really did read less like people and more like cutouts in a template.

All of that said, this was still an extremely enjoyable way to spend a couple of evenings. I think I am only slightly dissatisfied because the previous entries in the series were so good. The historical part is still fascinating, with the sweeping political landscape -- the part of history that most of us are familiar with, the lives of the grand people -- providing a backdrop for the convincing detail of the lives of the little people. We are becoming familiar with some of the townspeople, and time is passing; characters enter and leave Cadfael's life in the way one would expect a small town and abbey to work. The plot, though I could easily see the bones of it, had enough meat to keep me engaged through the end.

Overall, I wouldn't necessarily start with this one if you've never read a Brother Cadfael mystery, and I wouldn't necessarily have wept to have missed it. But it provided the kind of read I needed at the moment, and I'll quite happily pick up the next in the series on the strength of the three preceeding books.