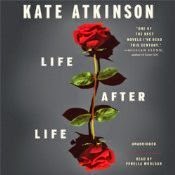 The ending: SO INTERESTING. Really. Structurally, the ending ... kind of ... left me speechless? So here's the thing: when Ursula got to the point of killing Hitler, I thought, right. Yes. We knew this was going to happen, it happens in the first paragraph of the book, though I partially spent the entire book trying to forget about that. Because of course Atkinson would go there, and I was disappointed, because why wouldn't you go there - the predicability was disappointing. But then that wasn't the end, though it was the end of that particular life. Atkinson kept going, and I was really relieved that we weren't ending on that note, because the book got interesting again, immediately. And though the ending was confusing and maybe bit off a bit more than it could chew, it was braver than I thought it was going to be in my wildest dreams. I love unfinished business in an ending: this ending was entirely unfinished, and I loved it for trying that.
Posted by Unknown at 10:52 PM 1 comment: