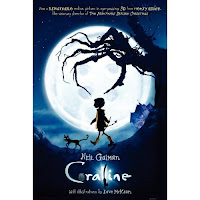 Coraline
by Neil Gaiman
HarperCollins, 2002
162 pages
So, I picked this as our parent-kid book club read for October, thinking "It's a little scary and quite atmospheric for Hallowe'en!" Apparently I had no idea how right I was, as I had a number of parents say "We had to stop reading this! It was too scary!" and a couple who said, "We decided not to read this to our kids; we didn't want to deal with the nightmares."
And of course, the kids who did end up reading it loved it. But what can you do? I am not a book slave-driver. I am not going to make kids read books that frighten them. I am not going to make parents deal with nightmares; every parent knows their kid best. That is not really the reading experience I want to provide kids with. So, instead of focusing mostly on the book, we're going to focus on what scary is, and whether we like to be scared, and why some people like scary books and some don't.
I usually fall into the "don't" category myself, but I really liked Coraline. It definitely had its creepy moments, but as I was reading it in bright sunshine on a deck overlooking the Caribbean, I was able to deal with them reasonably well. And it is a kids' book, so it's not like the creepyness is overboard. And it's Neil Gaiman, so it's handled with panache.

Coraline (not Caroline, thank you very much) is bored. They've just moved into a new flat, and her parents are too busy to take much mind of her. School doesn't start for a week, and it's raining outside -- so it's time to explore. When Coraline opens a door that leads to a world that is the exact mirror image of her flat, she finds it's populated with mirror images of her parents, her neighbours, and the exact same black cat. Only things are not all they seem, and despite her other mother's promises to make Coraline perfectly happy, something just doesn't feel right. Perhaps it's the fact that the black cat talks in the other mother's world, or that everyone has buttons for eyes... or perhaps it's that when Coraline returns to her own world, she finds that her real parents seem to have disappeared...

I really enjoyed this story. The little girl off to rescue her parents, frightened but brave, reminded me a lot of the Miyazaki movie Spirited Away which is one of my favourite movies of all time. The setting is tremendously atmospheric, and the magic seems to have rules but they're not explained to us, nor to Coraline; she just feels things out and uses her ample wits to make her way through the world. Which is what life is like, I find, as much for an adult as it is for kids. I liked Coraline very much, and she felt genuine: kids that age do get bored, and the world seems grey and drab, and the adults seem too busy to care about the big problems, such as finding something to do.

This is definitely a recommended read, and I'd recommend it to anyone over the age of six. Of course, some of those people are going to find it too scary, and some of their parents will be rather vocal about how it's not appropriate for that age (sigh) but it really is; it provides lots to talk about, and if you have a reader who likes something a little spooky, then this is an excellent, beautifully written choice. Also: cats.

The cat yawned slowly, carefully, revealing a mouth and tongue of astounding pinkness. "Cats don't have names," it said.

"No," said the cat. "Now, you people have names. That's because you don't know who you are. We know who we are, so we don't need names."

I love that you compared this to Spirited Away (also one of my all-time favourites); it's an excellent comparison and it hadn't occurred to me before.

I can sense vocal parents in my future, and it's a slightly scary thought :S Though perhaps even scarier are the present day classmates who say things like, "a librarian's role is to be a sort of higher lever buffer to protect children whose parents don't supervise their reading adequately and would expose them to inappropriate books"...

You know, I still really struggle with the vocal parents, although I am getting better at it mostly because I've made a study of how to best to deal with them without compromising my values, the library's values, or the patron-librarian relationship. It's (thankfully, in most ways) not a common enough occurence to get me a lot of practice, is the thing, though when it happens it takes up pretty much all of my brain space for days after.

Re: the present day classmates -- that just makes me want to ... do something inadviseable and drastic. I believe what they are suggesting is called "censorship" and of the worst sort, too. Librarians are never even supposed to comment on the books they check out to *anyone*. (I find this hard when it's a book I've really enjoyed, but get around it by saying, "Oh, if you get a chance, let me know what you thought of this one!" when I remember not to say "What a great book!")

I am lucky that I work with people who all have the same mindset: if parents wish for a child's reading to be policed, then they do it themselves. It's not our job and we're not at all interested in doing that. We'll help parents out if they want some "age-appropriate" books by making some suggestions, but I won't be telling anyone either outright at the desk, or implicitly by shelving certain things certain places, what they can and cannot read.

I get a little ranty about this stuff. Especially when it comes from librarian circles. It's not just students, either -- established librarians get caught doing really dumb stuff (like deliberately wrecking books) or saying pro-censorship things regularly. It makes me crazy because it's the exact opposite of what the whole profession stands for.

I'm keeping every one of my fingers crossed that I went up working with someone like you and not someone like this person.

How's this: When you are done, come live in Southern Ontario, and be one of my coworkers. :P My current coworkers would love you!

I absolutely loved Coraline (and lord, the movie was frightening!) The book club is for elementary school students, yes? I could see how they might be a bit frightened. Haha, I wouldn't have been, but I was a freak and reading Stephen King in 3rd grade.

Thank you for all of your advice with my up and coming book club meeting. I've talked to a couple of kids and it doesn't seem as though they really liked the book. Yikes. Even more scary. I plan on picking up the book you recommended from Amazon. Hopefully it'll get here before the 11th and I can spend an all nighter reading it?

I had one of the Moms who did read it tell me yesterday that they watched the movie and her boys loved it and didn't find it as scary as the book. They were considerably younger than some of the "too scary to read!" kids, too. Ah well!

You know, I find that *not* liking the book tends to make me want to talk about it *more* because I want to figure out what it was I didn't like, specifically. Especially if other people did like it. It can be a little touchy, though, if the discussion starts to get personal -- I always make it clear with the kids that I'm not going to take it personally if they didn't like a book I selected (when in truth, I get a little sad!) but we do have to respect others' opinions even if we disagree. I usually say this right up front before we even start talking about the book.

I'm really looking forward to hearing how it goes for you!

Yikes - that is disturbing what Ana's classmates are saying. Shudder. Maybe we should found our own library system - wouldn't that be fun? It seems to me that the adults I've talked to find this book way creepier than the kids do. Maybe the ones who weren't quite ready for it will go back to it when they're older? It's a shame to miss out on such a phenomenal book - but of course not every book is for every reader. Although this one should be. :-)

Oh, let's start our own library system! Wouldn't that be fun?

I actually think you might be right about the adults finding this book more frightening than the kids. One of the kids in the group said as much straight to her mother. This is also a child who wears a Batman costume to the library regularly. I find her quite endearing.

A Batman costume? I love it! (Have you ever mentioned to her that Batgirl is a librarian?) :)

I believe Neil Gaiman wrote it this way deliberately - to be an entertaining adventure for the kids, and ABSOLUTELY TERRIFYING to the parents who really think about the implications - that if they ignore their kids they could wander off and disappear forever... Reading the comments that seems to have been the effect. Kids are far more resilient than adults sometimes give them credit for. (Having said that, I think if it had been around when I was little I would have been scared and disturbed and probably ended up terrified of buttons!