Proust and the Squid by Maryanne Wolf 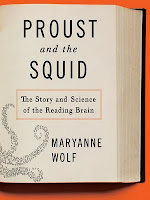 Proust and the Squid: The Story and Science of the Reading Brain
by Maryanne Wolf
Harper Perennial, 2007
306 pages

How miraculous it is that the brain can go beyond itself, enlarging both its functions and our intellectual capacities in the process.

I confess: I am intellectually lazy. I like things easy-to-understand, gentle on my mind. A little, tiny bit of work is fun, but generally I want spoon-feeding. I don't say this as a mark of pride, and I know I have a tendency to laugh it off -- "oh, it's just one of those things about me, you know? I'm lazy." But frankly, it's something, when I do stare it in the face, that I regret -- not a source of embarrassment, but a source of wistfulness. One of the reasons I think this blog is good for me is because it forces me to think sometimes. And when I do think deeply, I enjoy it. Thinking deeply, critically, analytically about things is what I miss so much about being in school. The wider world does not call on me to think the way school does; it doesn't (necessarily) prevent it, but it rarely encourages incisive thinking from me. So one has rather fallen out of practice.

As with this book. Reading the first section was a combination of small problems for me: I am out of practice with reading more challenging things, and I think that perhaps the first section of Proust and the Squid is a bit drier than some of the rest of the book. It's hard to say exactly how much of each was a problem, but I had to work hard to read the first bit, and to understand it. I am fairly sure that I didn't understand pieces of it, and will likely go back and try again.

Do not take this as a criticism of the book. This is an excellent book. It's challenging not just in its subject, but also to its reader. It does not force the reader to become a deep thinker, but it invites it. The second section is a fascinating dissection of the individual process of learning to read, one that I think I will find quite handy in my work, and the third section is a comparison of the unusual differences between a "regular" reading brain and the brain of dyslexics, as well as some more recent research and a little bit of speculation (Wolf is eminently qualified to speculate) on what exactly dyslexia is. Hint: we don't quite know, but we do know that it's not exactly the same in every individual. Also, we know it definitively exists, and there is evidence directly in the structure of the brain, despite the fact that some people will insist on telling you it's one of those things that the medical/educational establishment has made up.

Another thing I enjoyed about this book is how playful Wolf can be. Her section headings in Chapter 5 amused me, and often referred back to things that I'd read in earlier chapters or sections. She picks very apt quotes and even recites, in its entirety, a rather amusing poem on the quirks of English language spellings. While I did find the first section -- with its discussion of the history of writing, reading, and the neurological changes that happened to allow the above innovations, somewhat tedious -- dry, and I think in many cases simply beyond me, there were parts of it that were extremely interesting. With more practice, I might be able to understand more of it. Moving into the second section, in which Wolf discusses the development of the reading brain in individual children, felt like a relief and one wonders if it was a bit of a relief to Wolf as well.

She uses examples exceedingly well to illustrate her points, which otherwise might be challenging to grasp; one of my favourites is from page 123:

Vocabulary contributes to the ease and speed of decoding. Here's an experiment to illustrate the same principle for adults. Try to read the following terms aloud: "periventricular nodular heterotopia"; "pedagogy"; "fiduciary"; "micron spectroscopy." How fast you read each of these words depends not only on your "decoding" ability but also on your background knowledge.

What a simple, yet effective way to demonstrate the point she is trying to make to adults, who have (as we are reading this book) long since learned to read and read well, and forgotten the challenges we might have had as beginning readers.

This blog entry is going to be rather long, so in case you want the short version and not the version in which I attempt to enshrine in memory particular aspects or facts: this book is about how reading, and in particular about how the changes reading has made in the human brain, have allowed us to become what we are today. It is about how the biological processes in the reading brain have allowed the intellectual leaps we were able to make as individuals and as a species. Wolf is curious, engaging, and in awe of the incredible plasticity and adaptability of the human brain, and she is in love with writing and reading. This makes for a fascinating, involved, and ultimately inspiring read, and I'd recommend this book to anyone with an interest in neuroscience, literacy, how reading develops in children, and how reading has come about and changed our societies. Work your way through the dry parts because the payoff is absolutely there.

One of the things that strikes me about this book is how both ambivalent and curious Wolf seems to be about the changes that are happening in the way we receive information, and particularly in the way the brain works as we navigate an increasingly visual medium, the internet, to glean information. One can hear her concern clearly, that we are losing integral neural connections in the brain, losing the ability to think deeply and engage with written material, as we become more accustomed to instant information and a visually-based digital world. It turns out I am not the only intellectually lazy person out there. As humans, we tend to like shortcuts in which we are fed the analysis, rather than come up with it on our own. This is not necessarily good for our brains.

But one can also hear her curiosity about what comes next; she compares those of us who are alarmed by these changes to Socrates and his vehement distrust of the written word and the Greek alphabet. Clearly, despite Socrates' concerns, writing has been a good thing. We have the luxury of centuries to know this. But Wolf cautions that we shouldn't dismiss Socrates' concerns, either -- his alarm was valid. We lost something in the transition from an oral culture to a written culture, just as we gained something else. The reader gets the feeling that Wolf sees us losing something as we move from written culture to visual culture, but that she also sees the possibility of gain. What that gain is we have yet to figure out, but Wolf wants to know what it is.

Another interesting moment: Wolf is redefining the meaning of "fluency." It does not necessarily mean speed, exactly, so much as it means reading fast enough to provide the reader with time to think about, internalize, and examine what one is reading. Page 131:

Fluency does not ensure better comprehension; rather, fluency gives enough extra time to the executive system [of the brain] to direct attention where it is most needed -- to infer, to understand, to predict, or sometimes to repair discordant understanding and to interpret meaning afresh.

It appears, for example, that I may have to revise my vehement disagreement with the phrase "this book changed my life." Previously, I have been of the opinion that books don't change lives, that people change their own lives perhaps in response to a book. But Wolf makes a reasonable argument that reading (a book or otherwise) actually does cause measurable, physical changes in the brain -- which then, necessarily, does change one's life even if in minute ways we don't fully recognize day to day.

This book will have practical implications for the work I do with the very young at the library, and has re-fired my interest in pre-literacy, early literacy, and literacy in general. I am extremely glad I have read it, and will certainly be reading it again at some point in the future. I ordered my own copy so I can make margin notes and highlight things. Because I am going to try to think a little more deeply about it the second time through.
Posted by Unknown at 12:06 PM 5 comments: