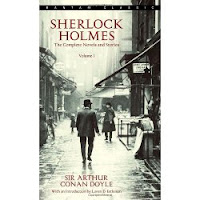 How does one review Sherlock Holmes? I mean, these are classic stories. And reading them, one recognizes why they are. Holmes is a compelling character, and the crimes he solves are improbable and often quirky; the stories themselves are generally short and satisfying. The relationship between Holmes and Watson is charming, sort of.

This volume I have encompasses the earliest Holmes stories from A Study in Scarlet to The Case Book of Sherlock Holmes, which ends with the somewhat unmemorable "The Adventure of the Second Stain". I have been reading it for probably two years now, picking it up now and then when I need something diverting, and I was finding that I was having a hard time getting in to anything else with the gorgeous reef fish distracting me.

(Seriously, I did spend copious amounts of time just lying on our deck looking down into the water to watch the fish. It was tremendously relaxing.)

Let me state upfront, I am an unabashed Sherlock Holmes fan. He is an ornery bastard, cocky and arrogant, and sexist, classist, and racist in the ways a highly-educated Victorian bachelor gentleman could be. He insults Watson frequently and Watson, in awe as he is, just rolls over. So why do I love the man? I can't explain it. I think it's largely because he is so sure of himself, and both intelligence and a strong sense of justice are sexy. But even more, I think it is that I have such a crystal clear sense of his character, and did from A Study in Scarlet on. As a character he is complete and fully-formed and fascinating. And my final thought is that it's almost as if Watson infects me as a reader; I don't care that some of Holmes' deductions are based on the extremely ridiculous pseudo-science of physiognomy. I don't care that his opinion of women is generally obnoxious. I just want more. I love that he solves the crimes so easily, generally, and that he only wants the mysteries that have a little quirk or oddness to them, and that he has a slightly insecure need for applause.

Before getting through this collection, I'd never read "The Final Problem" in which Holmes was to have met his match in Moriarty, and his demise. I'd thus never realized that Moriarty was only ever present in one story, and I kept waiting to meet him; I'd always built him up to be a much more consistent character across the canon. So it was a bit of a surprise to me that he only appears in one short story -- and not a very good one, at that, to be honest. It smacks of the worst sort of deus ex machina -- "Hey Watson, all these crimes I've investigated over the years, it was this dude running the show! Who I never mentioned before! And I've never mentioned that I think there might be some sort of ringleader! I've never even alluded to it!" And once they're over the Falls, Moriarty is done, though he certainly does cast his shadow over a few of the following short stories.

This surprises me a little, in that I'd heard that the stories following "The Final Problem" were mostly ridiculous and slapdash because Conan Doyle didn't really want to keep writing Holmes, but I actually found "The Final Problem" to be the worst of the group, where the one immediately following, "The Adventure of the Empty House" is actually pretty decent for a feat of narrative gymnastics in which you bring a character back from the dead. I don't dislike "The Final Problem" because Holmes "dies," but because of the way it's done. It's very much Doyle being done with his character and getting rid of him as conveniently as possible, and it comes across as lazy. I don't know if I would have found it to be as thin and see-through if I hadn't known there were more stories coming; but I can certainly believe I would have been shocked and appalled as a reader, because the "final" story really doesn't do the character justice. It's no wonder to me that Conan Doyle was forced to bring him back, and I must admit I think it serves him a little bit right for being so sloppy in the writing of "The Final Problem".

I have The Hound of the Baskervilles sitting on my desk at work, and I'm rather itching to get back to Mary Russell in Laurie R. King's wonderful series (though I do not like her treatment of Watson). The above short stories, save "The Final Problem", are the ones I recommend to first-time Holmes readers, as giving a sense of both the character and the author at his best. And I recommend everyone reading some Holmes at some point, because his influence appears everywhere in our culture. I wouldn't recommend reading this collection straight through, as it is MASSIVE and towards the end, especially, some of the stories start to run together. But as a pick-up-put-down diversion, I'm not sure Sherlock Holmes can be beat.
Posted by Unknown at 6:15 PM

I read them in one large lump one time. Not the best approach.

The interesting thing about Holmes is that he's one of those characters you can never quite separate from all the stories that came after. Once Doyle finished, everyone else picked up.

I *think* Moriarty is actually in one other, later story, but I'm not 100% sure. Like you, I was looking forward to meeting him and was surprised to find out how relatively insignificant he is. The same goes for Irene Adler; she's barely there, in the books. In popular culture and fandom, on the other hand, she's everywhere.

I read them all at one time, but saved one for later, so I wouldn't have read all the Sherlock Holmes stories. I lasted about six months before I read that last one.

I love this post. You have my dying to finally dive into that pretty Complete Sherlock Holmes edition I've had for ages. I've read 3 of the novels to date, but none of the short stories. Also, I can definitely see Holmes' appeal despite there being so much about him that's objectionable.

Bookwyrme - I get a little unreasonably worried about others appropriating Holmes as a character, because so often it's not done right. I mean, I love the Mary Russell books, but I hate what King did with Watson (her Holmes, on the other hand, feels rather spot on). After Darla at books and other thoughts keeps raving about the Enola Holmes mysteries by Nancy Springer, I might have to try those, too. I think it speaks to the strength of the character that Doyle created that I feel so strongly about who Holmes should be -- and that others feel so confident in writing further stories, too. I think, having read this, I feel a little more grounded in my idea of Holmes so I could see trying some of the other interpretations out there.

Re: Irene Adler -- I *know*! I do find it so interesting that both she and Moriarty seemed to really capture public imagination with such brief appearances.

Jeanne - Six months is pretty good! I kept getting distracted by other things, but I always seem to come back to these stories. I suspect I'll keep doing so for re-reading purposes, too.

Nymeth - I think that the strongest Holmes stories are the short ones; the novels sometimes feel a little drawn out to me. Thoroughly enjoyable -- although I have to admit I found A Study in Scarlet a bit much -- but I think I really prefer the short stories.

Kiirstin, what don't you like about King's changes to Watson? He's a pretty empty character in the original, I think, so authors frequently alter his character.

I never read Watson as a buffoon, and I think that's a common portrayal of him. Of course he's not as intelligent as Holmes, but who is?

Of course, we're getting Watson through Mary Russell's eyes, and though she likes him she has sincere doubts about his intellectual gifts, and that really comes through. The man was a military doctor, and by all accounts from the original text, he has a very good and busy practice even though he hares off after Holmes regularly; the women like him, and he's a crack shot. I don't see those as being characteristics of someone who is silly or foolish, particularly the military doctor and ability to come up with diagnoses and some forensic medical details on the spot.

I think because Holmes is so intelligent, the temptation is to see Watson as a bonehead who has to have everything explained to him, and I was rather sorry to see King continuing that particular trend in Watson's characterization.

You're right; in order to do what he does, Watson has to have a good amount of intelligence. The problem is, in the stories, his primary purpose is to hang around and say "That's amazing!" and "How did you do that?" The cumulative effect is to make him seem extremely dense. Or so, anyway, I recall--I'm rereading some now and will be watching Watson's character to see what I think this time.

Incidentally, one of the I like about the new BBC Sherlock is that Watson seems quite intelligent and settled in his own right without the character seeming to be that changed from the book--which is one reason I'm rereading/rethinking.

I haven't seen the BBC Sherlock yet - do you recommend? I have heard next to nothing about it, but I could see possibly really enjoying it.

I really liked it. I was surprised--Normally, I hate updates, and 19th century to 21st seemed a big jump, plus there were some camera things that could've been horribly gimicky.

But it worked very well, and Sherlock and Watson make a great team. They did not, in the first one anyway, retell any of the classic stories, but there were familiar elements showing up and contextualized beautifully. I think the first episode is still available streaming through PBS.org, the Masterpiece theater page.