The Crow by Alison Croggon

If I had to describe this book in one word, it would probably be unrelenting. From start to finish, it doesn't let up and I feel flat and empty now that I'm done. In the previous books in the series, more typical hero's quest plotlines, there are a few (well-set-up) "miracles" for Maerad, the main character. In The Crow, there are no miracles for the main character, Hem. Things go badly. And then they get worse. Then I wrote in my journal that I couldn't imagine how things could possibly get worse, but then they did, to the point where I occassionally had to put the book down and take breathers. The little points of light throughout the story, when something better shines through, are so brief -- but they seem all the more bright for that. Throughout, the reader just aches for Hem because we are right there with him and his moments of light are ours, too. I haven't had such an immersive reading experience for a long time.

I'm not going to summarize this book, in the interests of not spoiling either of the first two for anyone who hasn't read them. I'm hoping that if I haven't convinced you yet, this review will, as general as it has to be.

I said this on Twitter, and I'll say it again here: from now on, anyone who calls fantasy "escapist" will get a good kick in the shins. I have solid boots. Here's why:

The main reason this book is so powerful is that it brings war home in a way that not very many books do. There's a lot of war in fantasy books, and it's usually done well enough; we know that war is awful, we know that people die often in terrible ways, we know that it's a terrible, terrifying, desolate waste. We know it, but The Crow makes us feel it. It reaches right down your throat and tears your heart out, feeling the pain and suffering and monotony and complete stupid waste of war. Then it will stomp on your heart a bit and leave it alone in a dark locked room, because Croggon proceeds to throw the mind-numbing horror of child soldiers into stark relief.

I think this is why fantasy can be so powerful. We all know that child soldiers exist, and here, in Canada, we're politely disgusted and saddened by it, but it's way too far away for us to really understand. But I brought it home to my livingroom in the form of a fantasy novel, and because this is such a good book I couldn't look away. Yes, the child soldiers in The Crow are spell-controlled to an extent, which isn't something that happens in the real world, but frankly, that only makes it worse. The children in The Crow are controlled by spells. The children in wars happening in the world today are controlled by fear, brutality, hatred, forced on them by adults and by each other. By juxtaposing these two worlds, Croggon makes our world stand out in sharp, and devestating, contrast. We don't need nameless evil to do this to children -- we just need ordinary, garden-variety, human evil. It makes me feel physically ill to think of it, and those of us who live in sheltered, safe places need that brought home to us.

As if that wasn't enough, Croggon spikes things with a little bit of ambiguity; is it all right for a child like Hem to fight on the side of good, or does it make the adults around him every bit as wrong as those who are controlling the children fighting on the side of evil? Does the fact that Hem chooses to fight, rather than being coerced, make it okay for the adults around him to offer him the choice, to train him for it, to give him the tools that could cause him to see things, hear things, do things that no child should ever have to do? This question remains unanswered, by the way, and I'm still not sure how I feel about it.

Now, most of you who have read here for a while know that I'm not particularly fond of books that put me through the wringer. I don't like pain, I don't like tragedy in my books. But I loved this book and I am so, so glad I read it, and so glad that I didn't really have any idea what was coming otherwise I might have been afraid to pick it up. As it was, I may have had an inkling, because this book did sit in the basket for a long time before I did screw up my courage. I was right to be a bit afraid. I'm particularly glad, then, that Croggon is a masterful writer because I couldn't have not picked up this book, needing to know as I did what happened. I'm glad I read it. You should, too.

Again, much warm thanks to Darla for bringing this series to my attention. 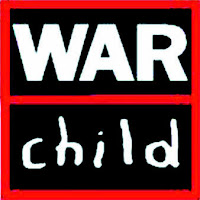 As a side note, please consider clicking through the above logo to head to War Child Canada's website and having a look around. They're an important group of dedicated people doing extremely compassionate and difficult work, and I wouldn't normally do this, but it seemed like an appropriate place to highlight this organization.
Posted by Unknown at 7:41 PM

I've seen your boots, I am not scared.

I definitely approve of those kicks in the shins! This sounds like an amazing book.

Nymeth - thanks! i've finally got the comments form working, too... found out last night that it was doing something odd. And yes, this is an amazing book. Although I'm now a little worried I've overblown it and people will be disappointed.

I loved, loved this whole series! One of my favorite YA aothors! Very good review!

Krista - thank you! i haven't checked to see if she's written anything else after this. i really hope she's thinking about doing so, if she hasn't!

I totaally want to read this series, Holy Crow *ha*. I am ordering the first book in the store RIGHT NOW! Then i will have it bumped up my tbr list pronto!

Mandy -- Excellent, I *also* just ordered the first book into the store! :) Perhaps I will see you when I drop by to pick it up... although my timing has sucked lately. Glad you like the new design. I do too -- when I first updated it I caught myself sneaking back and looking at it and grinning like an idiot, waaaaay too many times a day.

Hi Kiirstin, that's a nice teaser. I haven't read anything in this series. :)