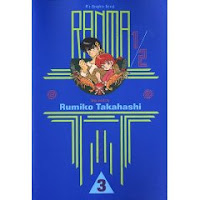 All right, I finished the third volume of Ranma 1/2 last night, and now I am going to have to be patient. The library system I work in doesn't currently have Volume 4, and neither does my local library (despite both of them having other volumes in the series). I just found out this morning that Volumes 4 and 5 have both been ordered for purchase, which is excellent. But. Long wait.

I'm glad I waited for a while after seeing the anime (the first season) to read the manga, because there are characters who are showing up who I recognize, but I can't exactly remember what happens. Which makes the discovery more fun.

I have to say, though, the third volume just doesn't seem quite as good as the last two. It's fun, of course. But there aren't quite as many of the quiet moments I enjoyed in the first two volumes. It's pretty much non-stop beating on Ranma by various characters. Which is... well, I'll admit, it gets a bit tiresome. There's only so many ways you can show someone fighting before they all start to look the same. My hope is that there is at least a little variation in tempo in upcoming volumes, in the same way there was in the first two.

And I know that Ryoga is some people's favourite character, but I really just can't get behind him. He's highly annoying to me, and much cuter when he can't talk. I think because though Ranma's loud and blustery too, Ranma at least is also intelligent but Ryoga is just really not. There was a wee bit too much of Ryoga in this volume and maybe that's part of why I didn't quite enjoy it as much.

Also, I didn't find the translation of the third volume to be as good as in the first two volumes, either. But maybe I was just in a more picky mood. Some of it didn't ring true with the pictures or the characters, and the fact that it seemed to be divorced from the images makes me think it's perhaps a translation issue, not a writing issue.

This was the first manga series I ever read, and I thought it was so quirky and funny. Interesting that you say that about #3 - I felt the same way. I think, if I remember correctly, #4 didn't have those issues. Hope you get your next one soon!

Oh, good! That's comforting. I was a little worried. But I know that Inuyasha was a little uneven that way too, so I was hoping for the best!