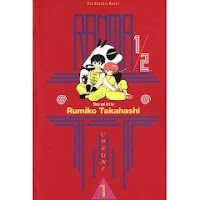 Reading manga is like eating Lays chips... you can't read just one. So despite my intentions of starting Lois McMaster Bujold's Beguilement, I picked up my two volumes of Ranma 1/2 and went on a Ranma kick. A kick that won't stop at just the two volumes this time, either, as I've got the next two on hold at the library.

Ranma 1/2 is a fairly long manga series (although not as long as, say, Bleach, or Naruto) so one has to be prepared to devote some time. Our protagonists are Ranma Saotome and Akane Tendo, both 16 years old. The primary setting is the Tendo dojo in Tokyo, the name of which, translated into English, is "Tendo's Martial Arts: School of Indiscriminate Grappling." Their fathers have arranged that Akane and Ranma shall be married, and carry on the dojo. Neither Ranma nor Akane are particularly happy with this arrangement. Akane especially is furious, having no interest in romantic liaisons with anyone at the moment. She's an accomplished martial artist in her own right, and has managed to beat every single challenger, male and female... until now. Ranma makes fighting her look easy.

But wait, there's more. When the Saotomes show up at the dojo, they are not quite what Akane's father has in mind. Genma Saotome, Ranma's father, is a giant panda; and Ranma is a girl. Due to an unfortunate training accident in China, when the Saotomes are doused with cold water, they change from their regular (human male) forms to giant panda and young woman. When doused with hot water, they return to their regular forms.

And thus we have the scene set for a hugely amusing romantic action comedy. There's lots of indiscriminate grappling (and groping), romantic moments, and cold water coming from the strangest places. There's love triangles. Actually, there's love trapezoids. At least once per plot someone falls in love with one of Ranma's forms. Things get even more complicated when Ranma's rival Ryoga shows up with his own secrets, falls in love with Akane, and generally makes life more difficult for Ranma.

This stuff is crazy, and I love it. It may be set in Tokyo, but this is a Tokyo where a giant panda sweeping the front steps of the chiropractor's office (where Genma picks up a job) doesn't seem to merit too much comment. Martial arts showdowns take place randomly and frequently. In volume two, we are treated to an exhibition of rhythmic gymnastics wrestling, and then of martial skating. This is all quite normal in this world, which makes it funnier to me. Especially because occasionally some character will be like, "What? Really? Does no one else think this is weird?" The amount of property damage regularly done is astounding, but it never seems to be a problem to get it cleaned up for next time it needs to get destroyed. 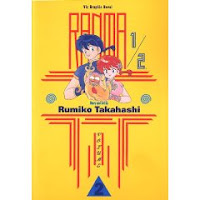 The dialogue, though occasionally not translated particularly well, is mostly quite well done. One of the best lines from volume two is Ranma's "We can win! If it's got the word 'martial' in it, we can win!" To which Akane replies, "Sure we can. All you have to do now is learn how to skate." And that exchange goes a long way to showing who Ranma and Akane are: Ranma, though he has every reason to be confident, gets into a lot of trouble due to overconfidence. He's trying very hard not to be in love with Akane, but that's not working out so well for him. He's generally a decent person and almost never a complete jerk. When he is a complete jerk, it's because he's being thoughtless, not because he's deliberate.

Akane is a tomboy, and she's very careful with her own private thoughts and feelings, though as the reader we're often privy to them. She's a lot more sensitive than she would like people to believe. She's no-nonsense, intelligent, and also very good at what she does.

The art is easy to follow, and perfectly suited to the tone of the story. There's lots of little jokes in the art, too, and Takahashi is a master at packing a lot of emotion into a single panel. It's not gorgeous, but for this story it doesn't need to be. The only complaint I have is that the reproduction in my Volume 1 (from Viz, the 16th printing done in 2002) is actually really badly done -- it looks poorly photocopied, and is much too dark in places. Which is not cool.

This series is highly recommended for anyone who likes manga, although I should maybe mention that (as with any Takahashi I've seen) there's above-the-waist nudity. It's actually a pretty good introduction to manga, too, as the art's really easy to follow, so if you're not used to reading graphic novels this one will ease you into it. The characters are awesome, it's really funny, and the romance is quite charming. I would not recommend it to someone who's looking to take anything seriously because it won't work for you at all. Will keep you updated as I go along. Hopefully blogging will help me make it to the end this time!
Posted by Unknown at 8:11 AM

It's so silly and light. It really won't take you long at all, if you can find them. I've got volume 3 here now, but volume 4 might take me a while, and I'm thinking I'd better order in volume 5 now or I'll be waiting for a very long time...