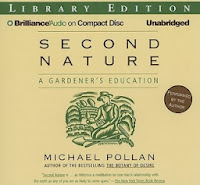 This truly is an excellent book, deserving of the accolades it has received over the years (yes, I can even see how it might be considered "a new literary classic" as the blurb on Goodreads would have it.) It also fits quite nicely into my pattern of waiting until the garden is safely under snow before getting excited about gardening again, usually at the impetus of a book like this. I didn't agree with everything this book offers - I'll get to my objections in a moment - but I loved that I was challenged by it without being shamed, and that I can feel, even at the end, that though I do disagree with at least one of Pollan's fundamental points, this book is still incredibly valuable and powerful and necessary. Perhaps I feel this so strongly even because I disagree with it.

It starts out as a seemingly simple, straightforward gardening memoir, though Pollan tells us right off where we're going, and straightforward gardening memoir is not it. I think I would have enjoyed it even if it had stuck to that. What lifts it above, however, is that Pollan transitions between gardening memoir to philosophical tract to history to manifesto, in and out, often all four things in the same chapter. And while that might sound like an awful lot of weight for a single gardening book to bear, Pollan writes so well that we move seamlessly from philosophy to history to personal anecdote to ethics to practical gardening info without blinking. One rarely feels weighed down, even when Pollan is talking about something as weighty as the history of landscape design in Western culture or the culture of the rose, largely because of the author's enthusiasm for the subject and his wry sense of humour. Pollan is fascinated by each subject he turns his pen to; the reader (or listener, in my case) is drawn along for the ride.

Even though he's very United States-centric (this is fair) and this book was originally published in 1991, I think Pollan's argument that we need a new environmental ethic is a very pertinent one in this decade and particularly in this country. I agree with him that the paradigms we have operated under have failed us as we operate as stewards of this planet. He suggests the "wilderness ethic" that requires complete isolation of wild places, an entirely hands-off approach, a la Thoreau, has lead us to believe that anything that is not untouched wilderness is therefore fair game for development of whatever sort we happen to feel we need, generally things like roads and suburbs. There is no middle ground. He proposes a "garden ethic" as the middle ground, a way towards a "second nature" in which human culture and wild nature can coexist, where the dichotomy of culture vs. nature no longer applies. He argues persuasively that generally gardeners already practice this garden ethic, even if they themselves don't recognize it as such.

Each chapter in the book essentially goes to reinforce this argument in one way or another. I found that the chapter in which he discusses ecological restoration to be particularly edifying; I could clearly and absolutely see his point, and found that I agreed with him more than I thought I did.

Where he did lose me, at first, and where I still disagree with him, is in his interpretation of naturalists and the wilderness. He argues that naturalists are too romantically engaged with the idea of wilderness, are too hands-off, are too anti-culture to accept that some human activity in the wilderness can be a good thing and might be a necessary thing. We are too blindly protective of our wild spaces, even to the detriment of the wild space. (He also suggests, a couple of times, that naturalists are lazy gardeners - this point, I am afraid, at least in my own experience I must concede, though in my grandmother's case I take issue.) He rails against wilderness - non-garden green spaces - as trying to encroach on human space, in fact setting up the sort of dichotomy he speaks against: nature is constantly trying to take back her own, in an indifferent, entropic sort of way. He suggests, in one of the earliest chapters, that no wild forest could ever have taught him as much about nature as his grandfather's garden did as a child.

To this I would suggest that Pollan just didn't have the right teachers, or the right role-models, for understanding how to learn from a wilderness. Were his eyes open to the right sorts of things, a forest has an awful lot to teach, has an incredible amount of value to humans. If you can walk through the forest like I can, and my mother, and my grandmother, and the way my grandfather did, and see and identify birds, and see and identify the various plants, insects, mammal tracks, lichens - if you can do this, you are never at a loss for something to learn. Every walk is different, each minute brings something new. (This is why I cannot really go for a hike for exercise purposes; I stop every few minutes to look at something.) And there is something valuable about going into a place with the mindset that doesn't involve "how do I put my human stamp on this, how do I change it [for the better]." This is not, in contrast to Pollan's suggestions, a lazy way to view nature. In fact, I think for many, it's harder to realize the patient openness of the naturalist's perspective than it is to go in and try to "fix" things.

That said, I get what Pollan is trying to say: that most landscapes, green or wild or otherwise, bear the stamp of human interference, and we'd do better to reconcile ourselves to interfering than to locking nature away to be something we only go visit on weekends, otherwise we're going to lose it entirely. I agree with that, fundamentally. I agree that wildlife management is probably necessary both for human enjoyment and for the good of the species involved. Pollan maybe should acknowledge a little louder that we don't always get it right, with our management techniques - Asian Ladybeetles, anyone? - but on the other hand, I agree too with the premise that basically what we're doing is managing nature in order to keep the planet habitable and pleasant for ourselves. Otherwise we're going to squeeze ourselves right out of this place. And the planet will do just fine once we're gone, keeping on keeping on, in the way it does. Pollan's point of view is unabashedly anthropocentric, whereas I think mine leans a little further towards viewing the species we share the planet with as having a right to exist for their own sake and not just ours, but we share a lot of common ground. In the spirit of his garden ethic, I think there's places to meet in the middle where we can come to compromises that don't devalue either point of view.

The audio is well-produced, though the CD breaks are at weird spots; but maybe it's just me who notices when a chapter starts and then a paragraph later you have to switch the CD? At any rate, Pollan reads the book himself, and is a good reader. It's nice to hear the words spoken the way the author intended them to sound. He's got a dryly humourous, self-deprecating way of reading that I think probably plays up those aspects of the text, and it works really well. Though he's serious about what he's saying, it never devolves into pedantry or self-important schlock. I wondered a time or two if reading the book would have felt like more of a slog than listening did.

As you can tell, lots of fodder for discussion and thought here. You don't have to be a gardener to enjoy this book, but you might find yourself curious to try growing something yourself. And even if you don't think that will ever happen, I think this is a valuable piece of writing as an effort to establish new ground, new ways of thinking and talking about humans and the environment. If it is so ambitious that it sometimes misses its mark, at least it tries. A brave book, and a necessary one.
Posted by Unknown at 10:05 PM