The Penderwicks by Jeanne Birdsall 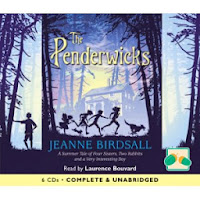 This book feels like an older children's classic -- along the lines of The Railway Children, say -- and yet is relatively recent. It felt like I was listening to a story from my childhood again; only this was brand new, with new characters and new adventures. And I'd say Jeanne Birdsall has taken pains to make sure this book will remain as timeless as possible; there are telephones and cars, but no mention of what sorts of telephones and cars. Technology doesn't really make an appearance, aside from a mention of a computer that one of the girls uses once, and though that itself could make the book feel dated, it doesn't. This is a summer tale, an outdoor tale, a tale of four girls and a cottage and a lovely extended vacation. With, as the book's subtitle mentions, two rabbits and a very interesting boy. And a dog. And another very interesting boy.

Maybe I am just a sucker for this sort of thing, but if that's so, I'm in good company: The Penderwicks won a National Book Award the year it was released. It has played very well with the adults who give out awards and starred reviews. It first came to my attention through the discerning Aarti. I am curious to know if it will play as well with kids. My child-parent book club is going to be reading it next spring, to get them set for summer, and I'm very curious to know if they will enjoy it as much as I have.

The Penderwicks, four girls, their loving but somewhat distracted father, and their dog Hound, are on summer vacation. Seeking a last minute cottage rental, they've chanced upon a place called Arundel -- a grand estate in the mountains, a mansion with beautifully manicured gardens. Their cottage is a humble, but lovely, little place behind the mansion, hidden from the main grounds by a tall hedge. And while that would be fun enough for four girls with big imaginations and lively curiosity, there happens to be a handsome young gardener (handsome enough and young enough to turn eldest Penderwick Rosalind's 12-year-old head for a first crush), a friendly and comforting housekeeper, a nasty, shrill, very rich lady who owns the place, her sneering suitor, and her mysterious son, who happens to be just the right age to make an ideal playmate for the girls.

And the girls play. They get into all sorts of scrapes and wild adventures over their three week vacation, some of them inadvertent and some of them deliberate, some of them dangerous and some of them harmless. They are good-hearted, imperfect, and impulsive, which makes for excellent stories. You're always rooting for whichever Penderwick is featured, even when you know she's squarely responsible for her own tricky situation. What makes this book are the characters, not necessarily the storylines; and not necessarily the secondary characters, either. Mr. Penderwick is charming, but hardly there (not in a bad way, mind you, and when he needs to be he is there) and Churchie the housekeeper, Harry the Tomato Man, and even Cagney the gardener are all pretty one-note, though very alive and each quite likable. Mrs. Tifton and her suitor are pretty much caricatures and extremely dislikable. It's the four girls -- motherly, responsible Rosalind, difficult and brilliant Skye, dreamy Jane, and shy little Batty -- and Jeffrey Tifton who make the story worth reading. They are gently handled by Birdsall, even Skye, who I'll admit was a challenging character for me at first though she did grow on me. Their dreams and fears and feelings are all considered fairly and without judgement, and they felt like very, very authentic people. I'm not so far away from Jane or Rosalind (though Skye is pretty foreign to me) that I don't remember what that was like. Birdsall has it pretty much dead on.

Which lead to a couple of very uncomfortably squirmy moments for me, listening in the car. At one point I actually stopped the audiobook cold without even realizing I'd planned to do it, just before Skye did something she should not have done, but that I couldn't blame her for, that I kind of wanted her to do, but that I was painfully aware was going to be mortifying for her and therefore by extension for me. Except when I realized what I'd done and turned the audio back on, it wasn't as bad as I'd feared. Birdsall once again treated Skye with dignity and didn't play up the full mortifying horror of the situation for amusement or tension as a different author might have done.

The reader of the audiobook, Laurence Bouvard, is a voice actor and veteran audiobook reader, and that comes through. Overall the narration was good. I occasionally had some trouble -- Jeffrey and Cagney sounded pretty much the same to me, and Mr. Penderwick just sounded silly and dopier than I think he was, text-wise. However, her voices for the four girls were brilliant and I never had any trouble telling any of them apart. I do find children's audiobooks can be really hit or miss for me; I don't like being talked down to and can't stand it for an entire story. I wouldn't say this was an entire hit, as it occasionally skirted that very subjective line, but it certainly wasn't a miss.

A warm, engaging, fun, gently-told story that appeals to me for any number of reasons. I think this would be a perfect family read-aloud, especially for the summer... or maybe for the cold spring, when summer seems too far away and a little warmth is needed.
Posted by Unknown at 10:51 PM

My kids didn't like this as much as Ron and I did, but they were too old for it when we discovered it. Among other thing, I loved that it had pet bunnies. So few children's books do.

I think that's the thing -- with kids there's going to be a sweet spot for this book, and if you get them too early or too late it's not going to resonate properly. A reasonable waiting period later, though -- I did really enjoy it as an adult.

Re: the bunnies, and actually all the animals, I thought that Birdsall did a good job of keeping them relevant through the story. I've read too many authors where a pet is introduced for some convenient plot point or (worse) character revelation, and then almost completely ignored after. I like it when an author takes pets seriously.

Authors that take pets seriously would be an interesting category for something!