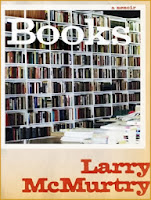 I would have done better with this if I'd written the review right after finishing the book, but so it goes. The difficulty here is that I don't have a lot of strong feelings either way. I picked this up because I very much like books about books, and I got some of that. I also got a bit of other stuff, and a lot of names that didn't really mean very much to me at all.

So, Larry McMurtry: he wrote Lonesome Dove. And Terms of Endearment. And, as he might put it, a number of other novels that have translated rather well to the screen. Though, contrary to what he seems to think, I actually do think of Lonesome Dove the novel first, not the television miniseries. This might be because I am a librarian, but I also think it's because that is indeed considered in some circles one of the best Western novels written. I haven't read it. I think I might, someday.

McMurtry has also written a number of memoirs, or nonfiction books that are rather wrapped up in his interests. Books is one of them, detailing the love of his life: buying, reading, and selling rare books. It starts with his first books, a gift from a cousin, a box of 19 boys adventure books to keep him company while he was sick in bed. By the time he had blazed through those books, some of them multiple times, he had started a lifelong habit he cannot stop: reading. McMurtry is a voracious reader, and originally started buying books just so he could read them, and then sold them only so he could buy new ones to read. But eventually he became a book scout, finding rare or desirable books, buying them from willing sellers, and then selling them to willing dealers. Eventually he became a dealer himself.

There are a couple of challenges here, and interestingly, none of them really ruined the book for me, though I'll admit I didn't love it. I did find it interesting; I don't feel like I wasted my time. But it wasn't as good as I hoped, and here are a couple of reasons why. First, and perhaps the fatal flaw here, was that I did listen to this as an audiobook. And I wasn't wild about the reader. Though there was a bit of a laconic southern twang in reader William Dufris' voice that I liked given that McMurtry is a Texan, he also read the book in a self-satisfied way that may in fact be the way McMurtry intended to come across -- but I hope not, and I rather think the whole tone of the reading missed the mark. It grated, sometimes; because of the reader, the author sounded more full of himself than I think he is based on the text. Occasionally I was able to separate the text from the tone, and I think the text was more intimate and chatty and less self-congratulatory than it sounded.

Also annoying was the tendency McMurtry had to kind of jump everywhere, and often not actually delve into a thought, or, more annoying, a story that he started. There were little snippets here and there, some picked up and many more not. Statements were made and then never taken anywhere. It is a short book, so there's some excuse there; it is the author's prerogative to finish or not finish his thoughts, but too much of that leaves a reader feeling unsatisfied. Further, we were promised discussions of interesting personalities in the rare and antique books trade, and we got some of that -- but not enough. McMurtry is almost careful to avoid talking about his fellow bookmen too much. Again, though, not sure how much of that lack was felt because I was listening. This is not a book that is meant to be listened to. (Actually, at one point McMurtry mentions his dislike of audiobooks. Point to you, sir.)

Particularly because of the audio format, the name-dropping was really noticeable. Because so much of it was name-dropping without context (though not all, and the parts that weren't were thoroughly enjoyable and interesting) this became a problem. I can't remember most of the names, although again, where McMurtry put flesh on his stories I do and would remember the stories if I came across the names again.

That said, the good parts are good. McMurtry provides a peek into a world sort of similar to the one I inhabit as a librarian, and yet totally different as well. I would love, if I had another life to live, to be an antiquarian bookseller. Hell, I'd love to be a rare books librarian, but I'm not looking for another specialty right now, particularly one with extremely limited job prospects. I love rare and old books, but not enough to make it my life, and listening to McMurtry it's clear that books, rare and old, are his. It's an interesting window into a fascinating world, and the little glimpses I got made me anxious to know more, made me wish to have the patience to comb through used book stores and junk yards and garage sales for those once-in-a-lifetime finds of first editions inscribed to mothers or lovers or even just well-wishers.

I generally like books by authors about books, reading, and writing. This one was a little light on substance for me to be entirely pleased, and though I got a few things out of it, I'm afraid I had dearly hoped for more. This won't stop me from reading McMurtry -- I'd like to try his fiction, particularly Lonesome Dove -- but I may steer clear of his nonfiction, at least in audio format. I feel kind of badly about that, because I think McMurtry is likely a lovely person, or at least, this book leads me to think so. Perhaps I would have better luck with a physical book, and I will keep that in mind.
Posted by Unknown at 9:23 PM