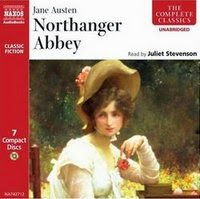 Here is a case where an audiobook works a lot better than the print version for me. I've tried picking up Northanger Abbey a couple of times over the years (this book has the distinction of being one of the earliest entries on my formal TBR: number 7, to be exact) and it just never worked out between us. And the beginning, even as an audiobook, is a bit dry. But the wonders of a good reader reading an excellent, scintillating, clever story have once again pulled me through. I loved this whole experience.

Which is not to say that we always got along, the reader, the story, and I. I found Juliet Stevenson's delivery of Catherine Morland's voice to be irritating at first. But there are some subtle variations that start to make a great deal of sense, and by the end of the seventh disc I was mostly won over, though I still think she sounds stupider than the book (having read a few passages since) seems to suggest. Also, the story gets a bit... flat at the end. Almost like the author is in a hurry. Or perhaps she is pulling back, letting her characters get on with things without too much interference. (Now I know where Mary Robinette Kowal gets it from, I'm inclined to forgive her a bit for it.) At any rate, it's a wee bit unsatisfying.

But enough of the bad! Shall we see which passages I particularly enjoyed? Or perhaps a summary first?

Catherine Morland is a lovely, unpretentious, and perhaps just a bit callow young woman of seventeen, who is on her way to Bath with family friends, the Allens. She is quickly delighted and extremely impressionable, but also easy-going and generous with her affections. Not, perhaps, as the narrator might wish, an exactly perfect heroine for a Gothic novel... but entertaining nonetheless. In Bath she meets a number of new friends, chiefly Isabella Thorpe, who shares her love of Gothic novels, and Henry and Eleanor Tilney, who are well-off, intelligent, and good-natured companions. When Catherine is invited to spend time at the Tilney estate, grandly called Northanger Abbey, her imagination takes hold: the ancient Abbey holds terrors everywhere for a young, unattached woman... doesn't it?

It's actually all fairly complex, Austen-like, and there's a fair bit more going on here than first appears. It's a pointed skewer of the immensely popular Gothic novels of Ann Radcliffe et al, surprisingly postmodern (Jane got there first!), a romance, an examination of reading and language, an examination of the state of women, a look at friendship. And probably more, but I was only listening to this, after all, not doing a close reading. Oh, and it's funny. It's really quite funny, in that perfect, almost surprising way -- sometimes sly, sometimes droll, and every once in a while full-out amusing.

And as a lover of books since childhood, there are a number of parts that are entirely, utterly relatable. Catherine is convinced that she shall be the one to discover the Abbey's deep, dark secrets, just by virtue of... well, she's not sure exactly what virtue is going to help her, but it's what happens in all the books, is it not? Catherine: I have been there.

Perhaps I shall let Jane do the talking now. There are a number of quite quotable bits, things that delighted me quite a bit. The narrator is rather put out that her heroine is not quite a perfectly accomplished, desperate, and desperately unhappy Gothic heroine, and we get some rather ... shall I say gently exasperated? asides from her. Very dry humour, of the sort that likes to lull the reader into complacency and then give her a bit of a poke.

The progress of Catherine's unhappiness from the events of the evening, was as follows. It appeared first in a general dissatisfaction with every body about her, while she remained in the rooms, which speedily brought on considerable weariness and a violent desire to go home. This, on arriving in Pulteney-street, took the direction of extraordinary hunger, and when that was appeased, changed into an earnest longing to be in bed; such was the extreme point of her distress; for when there she immediately fell into a sound sleep which lasted nine hours, and from which she awoke perfectly revived, in excellent spirits, with fresh hopes and fresh schemes.

"Because they are not clever enough for you -- gentlemen read better books."

"The person, be it gentleman or lady, who has not pleasure in a good novel, must be intolerably stupid."

This was a bit challenging to get started on, as I stated above. Now that I've been through the whole thing, I can totally see reading it (or listening to it) again. The payoff is entirely there, and it's a wonderful book. There is a good reason Jane Austen is still so popular after all these years. Dare I try Sense and Sensibility next? Because that truly is not one of my favourites. Or perhaps Love and Friendship? Or... well, the truth of the matter is that I'm already listening to Pride and Prejudice. Again.
Posted by Unknown at 9:28 PM