I have been keeping my eye out for this one for a while. Not an omnibus volume, per se, but the entire Cardcaptor Sakura manga from the beginning. When I somehow stumbled upon the fact that Dark Horse was going to do an omnibus edition, I just about fangirl squee'd myself hoarse. And then I was informed that Volume 1 had been preordered for me for my birthday, and you can well imagine the heights of excitement I reached.

I can't recall when my love affair with this story started, or how it came to be exactly. I had been watching Inuyasha (the neverending story, but awesome) for some time, and we watched the entire series of Last Exile (interesting premise, never reached its potential). But then somehow this one came into the mix, and it took one episode only for me to be hooked. This is my favourite television show ever. It beats out Mythbusters, and that is saying something, considering that my desktop background is currently a walrus photoshopped to look like Jamie Hyneman. That's probably too much information. ANYWAYS.

So yes, I was predisposed to like this as a read. I wasn't even really worried that it might not follow the anime (and really, it would be that the anime didn't follow the manga, which came first.) I was prepared for some pretty significant departures, even. There aren't many, and the details that are different are pretty insignificant, at least in this first volume of two. The most noticeable differences are that there are a few battles present in the anime that are only mentioned in passing in the manga, and the relationships are much more clearly spelled out earlier in the manga, I think.

And oh, the relationships... but wait, I should probably summarize for those of you who have no idea what the hell I'm talking about.

Okay, so. This is all told in flashback in the manga, but the basic premise is this: Sakura Kinamoto is an ordinary third-grader when she accidentally opens a strange book in the basement of her house (and what a basement! it's a FREAKING LIBRARY). Out of this book fly dozens of strange cards, leaving Sakura with nothing but an empty case -- and a strange, adorable flying teddybear named Cerberus (hereafter known as Kero, the nickname Sakura gives to him, which he protests strongly). Kero informs Sakura that a) he's the guardian of the cards, and b) she must have strong magic to be able to open the book, and d) if the cards he guards escape, a disaster of unmentionable proportions will befall the world. So... oops. Now Sakura is going to have to get them all back, with the help of a very pink magic staff and the attention-loving Kero-chan at her side. The trouble is, the cards have minds of their own, and many of them aren't so keen to be returned to card-shape and be stuck in a book, so there are plenty of episodic adventures to go around as Sakura attempts to capture them all. By the end of the first volume, we're nearing her summer before fifth grade and she hasn't captured all that many cards yet, but it appears there may be some competition coming. (Also: volume ends on a brutal cliffhanger. Be warned. I am not getting Volume 2 until Christmas *wails*)

BUT. The cards aren't really what this story is about. This is the plot driver, but what we're really looking at here are the relationships, at love in all its forms from friendship to family to crushes and hero-worship to the romantic ideal of true love. There are not just love triangles here. There is a love geometry of astounding complexity. There are opposite-sex crushes, same-sex crushes, teacher-student relationships (there are at least three, one of which seems very iffy but somehow also not? I guess I was suspending disbelief pretty hard there, because if I wasn't I might have been pretty upset and as it was I winced a lot), loyal friendships, wonderful family relationships, love lost through death or marriage to another, and of course the glimmerings of true love.

As an example, we have Sakura's crush, which is probably the most straight-forward relationship in the book. All of us who have been in middle school remember the absolute heart-pounding, terrifying and yet somehow wonderful, all-consuming crush, and the desperate fear as well as the desperate hope that the object of our obsession might find out. Sakura handles hers with a lot more balls than I ever did and is veeeery adorably transparent. But then we also have a quieter, more mature crush on Sakura from her best friend Tomoyo. Sakura here is completely oblivious, but it's pretty clear to the reader how that relationship works. It's also pretty clear that Tomoyo has no illusions about Sakura's sexuality, and that she's okay with Sakura crushing on someone else. That relationship is one of those "pure, courtly love" kinds, never to be consummated and barely to be spoken of. Lest you worry that this might be the only form of same-sex relationship in the book, rest assured it's not, and that the other same-sex storyline is really, really sweet and entirely romantic. But to tell you more would be spoiling things, so I leave it for you to discover. 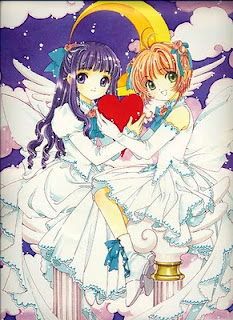 (most of the book is black and white, but there are some really lovely colour panels throughout)
Anyway. It's complicated, and affirming of love in all its forms. Another of my favourite relationships is between Sakura and her older brother Toya. They're at each other's throats constantly, with Toya pushing all sorts of buttons and driving Sakura nuts, and Sakura giving back as much as she can given her age and size. But when it comes down to it, they adore each other. Toya has some awesome (and hilarious) protective big brother moments, and there's a very touching story in which the tables are turned and it's up to Sakura to save him.

There's something about this story that makes me so happy to be loved by the people who love me. It's not that there's a single terrible relationship in Cardcaptor Sakura (except maybe the aforementioned teacher-student one, which you will notice when you get to it, and it's more that it seems like a terrible idea) -- it's not a "there but for the grace of god go I" kind of feeling, it's more a warm and fuzzy appreciation of the fact that I've got good people around me, and that I'm lucky to do so. It's an interesting and pleasant side-effect even if I'm not sure exactly where it comes from.

The story is light-hearted, mostly, and humourous, mostly, with depth at the right parts. It's a little silly and a little over-the-top (nothing like Ranma 1/2, not that I think it's even possible for any other work to touch that) but there are touching moments that are a pleasant counter-balance, and a reminder of what is at stake. Though one might suspect at first glance this story would be too saccharine, there's way more to it than that, and it's absolutely worth a second look.

Highly, highly recommended. Some of the humour is very manga-conventional, especially around Kero, and the art is intricate and often beautiful in a very manga way, which occasionally makes it a little hard to follow. On the other hand, the characters are easily distinguishable if highly stylized (I think Toya has to be around, like, 11 feet tall, or Sakura is perhaps only 2 feet tall?) and the facial expressions are perfection itself. No cookie-cutter, hard-to-read characters here. I would actually recommend watching the anime first if you can get your hands on it, and then reading this after; it adds dimension and a lot more depth to the anime, and makes the action very easy to understand. I'm about to start watching the entire thing again.

Just a quick practical caveat that I feel I should mention, lest anyone feels the need to jump out and buy this immediately: if you are international to the US, don't be ordering these volumes through the company linked at Dark Horse. The shipping fees are astronomical and not stated up front. The Book Depository or your favourite local store are probably much, much more economical options.

Also: my desktop image has changed over the course of writing. Just saying.
Posted by Unknown at 5:40 PM

Oh, I'm thinking this one will be going on my wishlist. I love this series! For all the reasons you mention - the wonderful relationships, plu the complexity and simplicity, so it has appeal to different age groups for different reasons, and the wonderful story it tells. It's one of the first manga I ever read, and it will always be one of my favorites. :-)

Darla, I am not surprised in the least to find out you've read this (I might have known before, but forgotten?) The complexity and simplicity -- as you say, I think that is a big part of the appeal, and part of what makes this a good candidate for re-reading. Heh, just thinking about the series makes me grin like a fool.

You're still reading Tsubasa: Resevoir Chronicle, right? How do you think it compares, overall?

I think I read the series before I started blogging, but I should reread it again soon - it is delightful. Tsubasa is good, but Cardcapter just tickles me in a way that Tsubasa doesn't, for some reason. Although you know I adore xxxholic! I've been watching the series with my kids, who also enjoy the books, and we're having a great time with it.

I love xxxholic too! And the series is good to watch? I will have to try and find it somewhere... we might even have it in the library. I know we have the whole series Fruits Basket to watch, and Bleach... xxxholic would be a good one to have too. I'm only up to volume 8 in the manga but I'm kind of saving it. But I am getting a real hankering to read it again...

We love the anime series - they do a really good job with it. The episodes are a bit scattered and out of order, but as long as you've read ahead a little bit, you should be fine. I'll be interested to hear what you think of it!

Oooh, I'll have to find it. Once I'm done with my CCS re-watch, I'll start in on that. I did check, we don't have it at the library, so :( but hopefully I can find it somewhere...