How to Train Your Dragon by Cressida Cowell 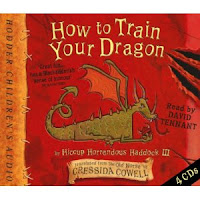 How to Train Your Dragon
by Cressida Cowell, read by David Tennant
Hodder Children's Books, 2004
4 cds

This is a first for this blog: an audiobook review! Yes, I have finished one! It was a combination of the engaging story and the mellifluous tones of David Tennant, who could read the phone book and have an avid listener in me. Actually, I should probably give Tennant the lion's (dragon's?) share of the credit here. I have never enjoyed an audiobook so thoroughly, at least in recent memory. I do remember listening to Letters from Wingfield Farm by Dan Needles and The Speckled Band by Sir Arthur Conan Doyle avidly as a child. The Elephant's Child by Kipling, narrated by Jack Nicholson with music by Bobby McFerrin, remains my firm standard for the best audiobook and possibly one of the best things ever. But lately? I have taken out many audiobooks from the library, and finished none of them.

Except this one. I know there has been a movie, and I know kids have enjoyed reading this book, but it has largely flown under my radar. But it crossed the desk the other day and I thought, you know what, I'm going to try it. This summer has involved a lot more driving than usual, and while I love me some CBC Radio One, they're pretty bad about re-broadcasting in the summer. So it's nice to have something on hand for emergencies. And pretty much from the opening moments I knew that I was going to enjoy this story.

Hiccup is a Viking. He's the son of the Chief of the Hairy Hooligans. The problem is, Hiccup is not much of a Viking at all. He prefers peace and quiet for thinking to violence and mayhem; he's far more brain than brawn. Therefore, he's also the constant target for bullying by his brawnier cousin Snotlout (who would very much like to depose Hiccup) and his followers. This only gets much worse after the boys claim their dragons, and Hiccup ends up with a... rather unique dragon, shall we say? I don't want to spoil anything, as the initial dragon catching is half the fun. The second half of the fun comes when an enormous Sea Dragonus Maximus washes up in a cove, and it's possible that Hiccup and his dragon may be the only hope the tribe has of survival.

The story is silly and charming, walking a fine line between being a bit too twee and really funny. In fact, if I was reading this story, I could see the puns being almost too irritating; but as a read-aloud, particularly by the supremely talented Tennant, it's awesome. I laughed out loud at several points. Tennant has found the perfect voice for the various characters, with the exception of Hiccup's dragon who I did find to be almost unlistenable (but I suspect that might be at least partially on purpose.)

The characters are entertaining and very endearing and/or evil, depending on what they're supposed to be. At least, that is for those characters who are fleshed out enough to have personalities. This being the first in a series, I think there are lots of opportunities for further character development in both the mains and the secondaries.

The humour appeals largely to my kid-brain, with snot, for example, being copiously mentioned, and a seven-foot Viking trying to appear heroic in his sister's dress. Highly recommended for children between -- oh, the ages of six or seven, and ten or twelve or so, and their parents; I suspect teens will find this too juvenile for their tastes unless being forced to listen to it because of a younger sibling, at which point they will secretly enjoy themselves.
Posted by Unknown at 4:46 PM

I adored the film version of this, but was hesitant to pick up the book (how could it compare?). An audio-book may be the answer. Lovely review!

celi.a, don't expect the audio-book or book to be exactly like the film as films are notorious for changing things, as you'll realise on listening to the audio-book about one of the main characters. I prefer the audio-book to the film as you can use your imagination plus there's DT's voice in various guises. I like all the Hiccup audio-books issued so far and all are read by DT.

Chayna, who's still miffed that DT wasn't used for one of the voices in the film.

I haven't seen the film myself. I tend to be pretty wary of films made out of books I've enjoyed. But it's really excellent fodder for a film, for sure... and even if the audiobook is different, it's definitely an excellent story and well worth listening to. Or at least I think so!

Thanks so much for this recommendation - sounds like a great one to listen to!

You make this sound absolutely delightful.

Darla - I was thinking of you guys when I was writing this review! Totally enjoyable.

This looks terrific -- I am interested in both the book and the movie.

Stephanie - from the impressions I've been getting from people as I've told them about this audiobook, both are worth checking out.

I read half of the book, and then watched the movie, then read the other half...don't ask why, that's just how it happened. I didn't like the book much, really. THe movie was great. But listening to David Tennant read the book is awesome...even if it isn't the best book. My library has it read by Gerard Doyle, though-someone who I don't like to read my audiobooks...i think he did Eragon. Someday, I will buy the David Tennant one from Amazon or something...but for now, it's on Youtube.

Chayna-David Tennant did have a small part in the movie...