You Grow Girl by Gayla Trail 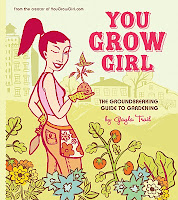 My reading plan for the week (Popular Music from Vittula by Mikael Niemi) got hijacked by sunshine. By which I mean, there is sunshine out there and when I walk outside it smells like spring. This means that it is time for me to break out the gardening books, because I can't actually get into the garden yet, probably for another four to six weeks.

Waiting for Gayla Trail's hugely popular (at our library) Grow Great Grub, I have instead picked up her earlier book, named after her blog, You Grow Girl. It's like gardening's answer to the young-hip-knitter books like Chicks with Sticks and Stitch 'N Bitch. It's a very basic guide to gardening, which I need more of like I need a hole in the head, but this one had a few perceived advantages over others.

First, Trail's Canadian. She lives in Toronto, not too far from me. I prefer to read advice from gardeners who have had to put up with crappy, too-hot-or-too-cool unpredictable summers and long, snowy winters. However, I've noticed that despite the fact that Trail gardens basically a stone's-throw (well, if I was Superman) away from my backyard, there is next to no Canadian-specific advice. It's very general leaning towards Americanized, even mentioning things like "state borders" instead of "provincial borders" and it has an inset telling me how to get my soil tested, if I'm American -- but no Canadian info on that. This is particularly galling as I had mentioned to a patron at the library that she was Canadian, and the patron was excited to read something specifically Canadian. Ah well. She does have an entire section on making it through the winter, so that helps. Particularly at this time of year.

The other perceived advantage was Trail's somewhat laissez-faire attitude, and on this she has delivered. I do not mean lazy (this is the sort of gardener I am), I mean try-it-and-see. With a helpful dash of let-it-go-don't-worry-about-it. See, though I am a lazy gardener, I am also an anxious gardener. Or I was, when I started. I am much less now, because let me tell you, being lazy and yet anxious is an exhausting combination. It helps to have books that essentially remind me that plants want to grow, much like The Potted Plant (reviewed lo these many years ago). Sometimes bad gardening books can be like bad parenting books: they make you feel like an idiot if you aren't doing things The Right Way. Trail's writing, however, is neither patronizing nor admonishing, and that's a great thing in a beginner book.

In this book, too, I have also discovered several nifty little ideas that get the creative gardening juices flowing. There are a few little recipes, sewing patterns (I'm going to try to make my own reusable tea bags now, when I get around to it) and other crafty ideas and plans, all very straightforward. The illustrations are cute and hip. Despite not focusing so much on Canada, Trail does provide some reassurances for container gardeners, including those who grow plants on fire escapes and tiny balconies. She's got some great ideas for people who are gardening in very small spaces. I don't have to put up with this anymore, but I still appreciate it.

Finally: if you're a young, hip, male gardener, there is no reason to not use this book, despite its title and despite the introductory paragraphs which do target young women. Generally, after that, Trail doesn't bother with making any distinctions; she just basically mentions the continuing trend of women of my generation in our particular culture picking up things for pleasure that our grandmothers had to do. I'm always sensitive to anything excluding one gender or the other, and this book certainly starts off with the impression of doing so. Part of me wishes she hadn't bothered with that and just kept it to the rest of the completely gender-neutral book, but I guess in the field of beginner gardening books one has to find a way to distinguish oneself.

Overall, Trail's gardening tips are simple to follow (largely) and organic; and her writing style is very accessible, enthusiastic without being terrifying or overwhelming. It is written as a book for raw gardening beginners and as such it delivers admirably. Someone like myself, who considers herself an expert armchair gardener but a bumbling beginner outdoors, can also pick up a few things, but there's not a lot here that will be brand new.
Posted by Unknown at 10:47 AM

What perfect timing! You mentioned this book to me on Twitter, but it's great to get more thorough information on it. (And now I'm putting it on my TBR page on my blog, so I'll never forget.)

It's a shame that Trail -- or her editor? -- felt she had to slant the book for Americans. Whatever it takes to sell a lot of books, I guess, alas. But we're used to that up here, so we can adjust.

This is such a coincidence because I just spent part of my morning dumping out the old soil and dead plants from my balcony pots from last year. Time to start fresh, hopefully with this book, and some good info.

I hear ya on the "bumbling beginner," though. I still feel like that too.

My grandmother, who has been gardening her entire life, tells me she still feels like a beginner. I suspect it's one of those feelings that never quite goes away -- things are always changing out there!

It sounds like Grow Great Grub has come in for me too -- I'll remember to let you know when that review is up!

Hmm. I can understand how you would feel frustrated about a book written by a Canadian that seems to be more pandering towards American readers. :( Sounds like it would've been a good read though, even if you don't necessarily need another basic guide to gardening. ;) Am intrigued about the sewing projects though. Sounds cool.

Court, it is definitely a good gardening read. But yes, disappointing in that one respect. I know why they do it, because south's a much bigger market, but I really wish that the Canadian perspective was given equal airing time, considering.

The projects though -- she's got sewing a garden apron, and all sorts of neat little ideas for fences and pots and labels and that sort of thing. I liked that part a lot.

Sounds like a must have for all keen gardeners. Thanks for sharing this book with us, a great idea for our Mother's Day gift to ma-in-law.

Glad I could help! (That's right, Mother's Day is coming up. Hmmmm.)

I'd love to invite you and your readers to join my poetry survey. I'm looking for your 10 favorite classic poems. Read more about it here.

Caught your review by chance and thought I would clear up the Canada/US issue. Yes, I'm a Canadian who lives in Canada but my readership is overwhelmingly American by the numbers. Both books are also published by American publishing houses. That means I have US editors and have to write with US spellings and even shift some of the words or phrases I tend to use that are considered too Canadian. When I write for a Canadian magazine, newspaper, or other publication I write with Canadians in mind... which still poses its problems since Canada is a massive country with a wide variety of growing conditions.
That's just how it goes in publishing.

Gayla, first of all, thank you for commenting! I really appreciate it. And I did suspect something of the sort. It's one of the things that, as a Canadian, always bugs me -- but it's also something I can understand, entirely. It doesn't make sense to alienate the biggest market around. It's hard not to be a little sour about it, but it's also not terribly productive. I was just surprised, perhaps unfairly. Now that I know what to expect of Grow Great Grub, that's one aspect that won't be getting in the way of my enjoyment.