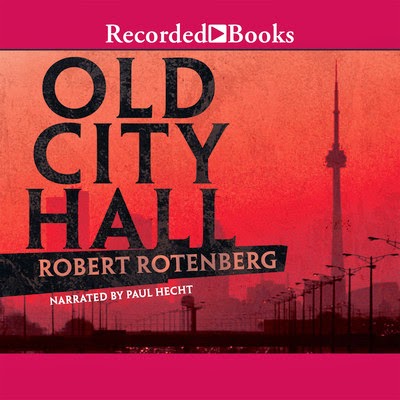 Here's an interesting case: a book I can acknowledge was not terribly well-written, in the main, but that I still quite liked.

I think I read a lot of things that aren't brilliant writing, and I generally enjoy them if they've got decent characters and a good story. It's pretty rare that I can ignore out-and-out poor writing so comprehensively as I did in this case. But Old City Hall was at least extremely entertaining to listen to, and at best it was great. The writing isn't consistently mediocre; it even has some very good moments. Enough that I have hope for the future books of this series.

And as I said, something did grab me. Maybe I just enjoyed hearing a mystery set in Toronto, or maybe in the end it was the characters - wooden and obscure as some of them felt - that did it.

A newspaper deliveryman arrives at the penthouse apartment in a downtown building at exactly his appointed time, bearing a copy of The Globe and Mail for Kevin Brace, Canada's most famous radio voice. But instead of the usual punctuality and polite chat he has come to expect, Brace meets Mr. Singh late, with blood on his hands and a stunned expression - "I killed her," he says. Sure enough, Brace's younger common-law spouse is naked and dead in the hallway bathroom, a single stab wound to her abdomen. Brace refuses to speak to anyone, including his lawyer, and the pieces in what should be a cut-and-dried case just don't quite fit.

Ari Greene is the lead detective, and the series is named for him, but this story is told from multiple perspectives as well as Greene's, including Nancy Parrish the defence lawyer, Arthur Fernandes the prosecutor, and Daniel Kennicot, a young criminal-lawyer-turned-police-officer. It's a fairly straightforward procedural and steeped in Toronto in deep winter. Because of the multiple perspectives we don't get terribly deep into the heads of any of the characters, and Greene is a bit of a cipher, though the bits with his father are lovely. Daniel Kennicot was the character who really stood out for me, and this is a good thing as things seem set up to continue with him as a main character throughout the series.

The problems come in with the plot, a little, and the writing, a lot. The plot is well-done, except that it starts to spin a little out of hand, as though Rotenberg was trying to jam as much in as he possibly could, and make comments on certain societal things. It gets complicated and I do like that while the mystery wraps up there's still enough messiness to make it believable. And while I enjoyed the procedural aspects of the book a lot, I did find that Rotenberg gets a bit explain-y. He gives the reader too much information - doesn't let us come to our own conclusions, about characters or about events - and he often gets a bit dry while talking about aspects of the legal system, such that he's almost taking the reader aside and saying, "okay, this is how this works, this is why these characters are doing that."

Regardless, I enjoyed, and enough that I'm hoping to get to The Guilty Plea soon. Paul Hecht, by the way, does an excellent job of the narration. I kind of forgot I was driving sometimes, I was paying so close attention. I should probably watch out for that. Recommended for fans of light and easy-to-follow mysteries, especially if you want a different sort of setting, and want to experience a parallel universe where the Maple Leafs are actually kind of a hockey team and not a joke.
Posted by Unknown at 9:21 PM

Wow! I sure liked the book a lot better than you did! I wrote about it here: http://lettersfromahillfarm.blogspot.com/2013/10/old-city-hall-by-robert-rotenberg.html

Ha, no kidding you did! But to every reader something different appeals, right?! And the characters here still drew me enough that I want to know what happens next. I thought it was a solid book in lots of ways, but the writing just did nothing for me at all.