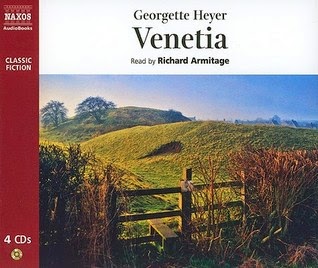 What this comes out to is a light, highly entertaining Regency romance where the characters are all very believable (even the awful ones are believably awful) and the motives and means don't seem to be imposed from a different time, which is an achievement given how strong-willed and carefree Venetia is. The plot isn't terribly exciting or ground-shaking but it's solid and has enough turns to keep one's attention. The dialogue is funny, Venetia is fantastic, and the audio abridgement might have left me feeling like things were a tad rushed but overall still worked out really well. I think this was a great introduction to the Heyer canon for me and I'm absolutely looking forward to the next.
Posted by Unknown at 12:02 AM

Heyer is always fun. She's one of my go-to authors when I'm tired, can't think of anything else to read, or am simply in the mood for a light-hearted read about independent heroines in great dresses working their way through a restrictive society--generally quite cheerfully.

This is the thing, Venetia is so happy! I mean, not entirely, but she's optimistic and generally her outlook is positive. I really, really enjoy reading that; it's so pleasant!

Hooray! I agree with you - I love the honesty of the leading couple. And just how nice Venetia is, even though she has so many sucky people in her life. Glad you read a Heyer!

It's amazing that she's so positive and kind when she's surrounded by some of those people. Honestly. One wonders how she managed to stay as nice as she did.