The Age of Wonder by Richard Holmes 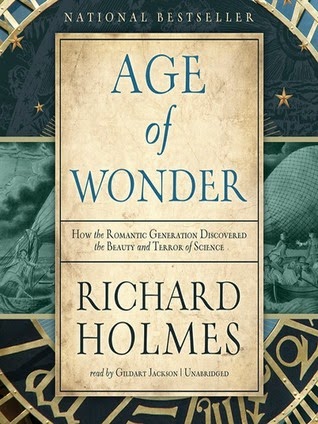 The Age of Wonder: How the Romantic Generation Discovered the Beauty and Terror of Science
by Richard Holmes
Blackstone Audio, 2008
22 discs, unabridged

This book is phenomenal, and therefore I'm not sure how I'm going to talk about it without gushing unscientifically all over the blog. One looks at 22 discs of what is essentially science biography (though much, much more than that) and quails a little at the task one has set oneself, but if I didn't love exactly every minute of it, it was close. This book is extremely well-written and lends itself to listening, though I think I will eventually re-read as well, since there were quotes and details that I know I have forgotten due to being in a car and not being able to stop to write things down.

For a brief summary, to help me put my thoughts in order: this book takes us, time-wise, from Captain Cook's voyage to view the Transit of Venus from Tahiti to that fateful voyage of the Beagle, with one Charles Darwin along as ship's naturalist. This book is described in some places as a book that delves into the lives specifically of astronomer Sir William Herschel and chemist Sir Humphry Davy, both names which are hopefully at least vaguely familiar to most people. I would say that in addition it is framed by the extraordinary life and career of Sir Joseph Banks, who was a self-financed naturalist aboard Cook's ship the Endeavour and went on to become one of the British Royal Society's greatest presidents, presiding over that body for 41 years.

With Banks' life and Royal Society presidency framing the book, we do spend a lot of time with William Herschel and even more with William's sister Caroline - whom, I am horrified to say, I had even not heard of - and then subsequently Davy, whom I knew of mostly as the inventor of the Davy Safety Lamp, that ingenious mining lamp that saved many a coal miner from a horrible fate. Turns out I had a lot to learn about Romantic Science.

Holmes makes a strong case, and makes it explicit in his Epilogue, that part of understanding the history of science is understanding the people who shaped science, not just listing their discoveries or theories. The term "scientist" didn't even exist until after the 1830s, and even as it started to emerge was incredibly controversial (attached, as it was, very provocatively, with the term "atheist," though it was also attached to "economist" and "chemist" and the like.) Therefore, understanding the major players and the major achievements in this tremendously exciting and fertile pre-modern period is tremendously important when we're trying to understand how we got where we are today.

So, biography: not one of my favourite genres. I tend to spend a lot of time wondering how the heck the biographer knows So-and-So was thinking That when This happened, particularly if So-and-So didn't leave a lot of documentation behind. Luckily for us, the So-and-Sos of the Romantic period in Britain tended to leave heaps of documentation behind: letters, lab notes, journals, published works, even memoirs. Holmes quotes liberally from all of these and makes connections, and occasionally includes corroborating quotations from So-and-So's friends, acquaintances, colleagues, and contemporary media (newspapers, pamphlets, even satirical and critical publications). In other words, I had no problem with the biographical portions of the book.

What I realized was a) how little I really did know about that period of history, and b) how much we knew, even back in the late 1700s. How quickly, once the voltaic battery was created, Davy started isolating and identifying elements. How soon the Herschels realized that the universe was enormous, that we were just one little planet in a universe that likely contained millions of such planets and almost certainly contained other forms of life. Think of the religious implications of this at a time when challenging accepted Christian doctrine could be deadly in Britain (Holmes mentions, briefly, the mob attack on Joseph Priestley's library and home; I believe there were a number of factors there, but religion was the big one.) The Herschels, happily, managed to avoid any such violence, despite the fact that Herschel was pretty clear on the fact that he believed there was life on the Moon. Their whole story was totally fascinating, not just because of their combined brilliance and the number and importance of the discoveries they made, but because of the relationship they had, the emotional and sometimes strained bond they shared. Apparently other Herschel biographers tend to be hard on Caroline; Holmes is mostly very sympathetic to her, providing a well-rounded picture of both siblings and their relationship. He provides a convincing argument that they felt deep affection for each other, but doesn't gloss over the fact that both had their difficult moments and unhappiness.

I think what struck me most profoundly about the whole book was that Holmes didn't just look at the lives of the scientists or their achievements, but also, so importantly, at the lives and thoughts of the literary figures who were their contemporaries: the Shelleys, Byron, Coleridge, Keats, Wordsworth, Walter Scott, and Erasmus Darwin (whose enormous poem The Botanic Garden is now firmly on my TBR), and many others to a lesser extent. One of the digression chapters, in which we veer away from the lives and accomplishments of the Herschels and Davy, is on the beginning of hot air balloons; in addition to being the most tragic chapter, for reasons that should be easy to understand, it's also one of the more amusing, thanks to a few well-chosen quotes from Sir Horace Walpole. We see that science and poetry are connected, intimately, at this period of time, though arguments about the oppositional nature of science and literature, empirical fact and creative imagination, are starting to surface as well. This splitting of science from the arts is touched on a couple of times, I think to good effect. It's a topic I find particularly interesting, especially in our society where it tends to be assumed that someone who is good at math necessarily is not at all interested in literature, and someone who loves to paint couldn't possibly give a fig about physics. Holmes even touches on one of my particular pet issues when discussing Davy: applied science versus theoretical science, and the need in a progressive society for both.

This book is absolutely well worth the time and effort. I ended it wanting to know more, which is not to say that Holmes didn't give me enough to ruminate on. The Age of Wonder is at times sad, thrilling, awe-inspring, frustrating, funny, and always, always fascinating. Holmes writes incredibly well - very clearly, with occasional dry humour, creating tension without manipulating the reader so that suddenly you're halfway through the book and it feels like you've just started it; and he manages to make everything very accessible so that even those who aren't familiar with the scientific concepts he's discussing will have no difficulty following. Highly, highly recommended.
Posted by Unknown at 9:20 PM

So glad to hear this! This book is on my TBR, definitely one I want to read, especially now that I see your thoughts on it.

So good. Long, but worth it. History and science and their interactions are totally fascinating to me.