Level Up by Gene Luen Yang and Thien Pham

I was so charmed by this graphic novel, though it occurs to me that "charming" is maybe not a word that fits, exactly. "Satisfied" is maybe closer, but doesn't quite fit, either, because it doesn't convey the warmth of the way I feel about this story. Perhaps we should just stick with "I'm very glad I read it."

My experience of this book was interesting, too. Usually I blow through graphic novels; really, there are few that have taken me more than a day to read, and those are usually long (the Cardcaptor Sakura omnibus editions, for example.) This one, due to various things (including, ahem, video games) I took several days to get through. But I think this was maybe a good thing. It allowed me to think about what I was reading, rather than just inhaling it. 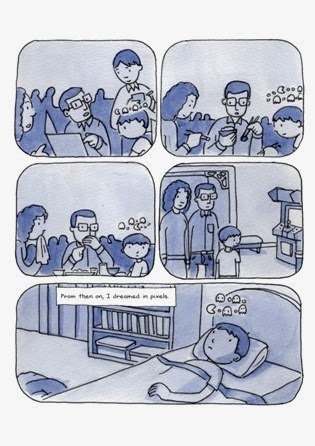 Dennis loves video games. Perhaps a bit too much. He's just been kicked out of college (the gaming's not the only reason) and he's got no idea how to tell his widowed mother; he knows his father, who passed away just after Dennis finished high school, would be extremely disappointed. In fact, he keeps thinking he's seeing his father's disapproving face on every statue he passes... and then the angels show up. It turns out they've arrived, straight out of a greeting card and with his father's blessing, to help Dennis achieve his destiny: go to med school, and become a gastroenterologist. 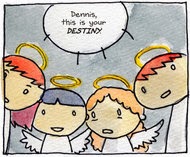 It's a little hard to describe, but when you're actually reading the book, it's pretty straightforward. It's also not all that much about video games or about the angels. It's about Dennis wrestling with his internal demons, coming to terms with his father's death, trying to figure out what he wants to do, and what duty to family, friends, and self has to do with any of it. He's an incredibly smart kid, he knows how to work hard, and he loves video games. What's more, he's actually pretty good at them. (His gamer friend, Takeem, suggests that Dennis' brain was made by Nintendo.) But his father always viewed them as a total waste of time and money, and Dennis still feels the weight of his disapproval, and his hopes and expectations for Dennis, too.

If I had any complaints, it's that things do seem to come across as a bit too easy. Dennis is a stellar gamer, able to win tournaments regularly. When he's at school, he's got four angels hanging out and doing his laundry, his dishes, feeding him, and so on, so all he has to do is concentrate on his studies. That said, it is a graphic novel and he's got four angels doing his housework... so, no expectations of gritty realism here? And he does work hard, at whatever he chooses to do. There is also a bit of an either/or dichotomy happening with gaming/living a real life, but let's just say that someone like me probably has no place criticizing that. I know some people seem to be able to cultivate a healthy balance, but lord knows I'm not one of them. Perhaps that's why I liked this book as much as I did.

Overall, the tale is told with simple but lovely artwork, gentle (often very funny) humour, nostalgia for the great games (Bubble Bobble makes a brief appearance; Pac Man figures heavily) and huge sympathy and respect for Dennis' character and his challenges. Well worth a read, particularly for those interested in contemporary coming-of-age stories for teens and young adults.
Posted by Unknown at 3:37 PM