On Basilisk Station by David Weber 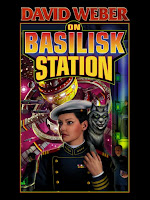 First of all, free eBook. Is awesome. Also legal. Thank you, Baen Books and David Weber for giving me the chance to test out the Honorverse for myself.

Sadly, the gambit didn't work out this time, as I'm not going to be purchasing, or reading, any of the other Honor Harrington books. It's not you, Commander Harrington and David Weber. It's me.

I want to be clear, because hopefully I can at least raise the profile of the book in return for its free-ness: this is a good book. This is a really good book. It's well-written, detailed, interesting, engaging, creative, adrenaline-boosting, entertaining, and even thought-provoking. And if you are in to military science fiction, this is a great, great place to go, as Weber's legion fans can attest. (Actually, if you're in to military science fiction, I imagine you've already been here. I'm late to the party on this one). In Commander Honor Harrington, David Weber has created a really attractive main character; she's intelligent, competent, and generally kicks ass. And (I mention this because it's not always the case in military SF) she's a woman in a powerful position and almost no mention is made of it; more mention is made of her youth than of her gender. Her gender does not signify, nor do the genders of any of the other characters in the book. They are simply people doing their jobs. I love this.

There are several moments in this book where the reader wants to sit up and whoop as Harrington makes yet another connection or faces down yet another bully with a will of steel. She even comes across as being almost too good sometimes, but she's not perfect, exactly. I will admit there were a few times when I thought maybe she was too good to be true. But I liked her too much to care.

I can't really talk about this book and my reaction to it without some major spoilers. So if you like military fiction, or science fiction, this is for you. The detail encapsulated in the books, the work that has gone in to creating the universe his characters inhabit, is stunning. I wish I could follow Honor through her next thirteen-plus adventures, but I can't. If you have already read this book, or know you won't, and wish to know why I'm not going to go further, read on. If you've got this book on your TBR, stop now.


/spoilers ahoy! seriously guys, do not read past here if you want to read the book.

Guys, the ending. The ending is brutal. The ending is just. so. brutal. I'm talking as someone emotionally invested, but also as someone who has a upper limit for violence and death and this book sailed clear through that at hyper speed. Worse, I knew what was coming. Well, I didn't know exactly what was coming, but about halfway through, I knew that things were going to go sour, and I figured it would happen quickly, and I figured that it would be bloody, and I figured that I wasn't really going to like it. It made reading on both pleasurable, because I liked where I was, and painful because I knew it was going to end badly. And boy was I right.

The ending is a bloodbath. And what makes me feel somewhat worse about hating it, is that it should have been. If Weber had wimped out and let all the mains get away scott free, I would have been disappointed in him, and the book wouldn't have been good. It would have been an exercise in fantasy, of the worst sort, the sort I find trite and the reason some people don't take SF/F seriously. War is hell. And it should be shown that way, guts and glory. Weber knows this, so we get plenty of both.

If I had one technical problem with this book, this would be it: I realize she's Navy, but my impression is that Honor Harrington hasn't seen a lot of live action. Nor have the other characters. So I'd like to have seen a bit more about the psychological toll the death and grief would have taken, because while it was mentioned, it was... kind of glossed over. Frankly, I was a little uncomfortable with how comfortable Harrington is with the way she is lionized, though she did deserve it; I would have been a lot more traumatized than she appeared to be.

Actually, I was, and herein lies the problem. As much as I would love to spend more time with Honor Harrington, this book made me feel ill at the end. The characters -- the aliens, too -- who died, some just terribly, and the ones left behind -- there were scenes I couldn't get out of my head. I couldn't stop thinking about it. I felt like I needed to dip my brain in bleach. And I don't think Weber was gratuitous with the violence and the death, it's just that my threshold is low. There was implied torture -- implied makes it worse for me. There was a slaughter of drugged-up religious fanatic aliens (we understand why the slaughter has to take place, but still.) There was people being blown to pieces by shrapnel in the vacuum of space. People I liked, people who were narrating the action, people who were good people and who died doing heroic things or not. The people who survived, you read the roll call at the end and you feel like you've been given a gift because that character made it. Even Honor Harrington's seemingly unbeatable genius can't save the day entirely. It all fits, it's all exactly the way it should be, and I can't handle it.

So why did I start reading this book? Well, I'll be honest. I thought it would be a light, guilty pleasure, something more along the lines of Anne McCaffrey's space operas. I didn't realize until things started sinking in just how bad it might get, and once I realized it I was too invested to stop.

I was feeling a bit miserable about my inability to face the music, as it were; my constitutional aversion to watching bad things happen to good people in fiction. And I was thinking about how sometimes people equate tragedy with good literature, and the rest of it is fluff, meaning I'm somehow not a serious reader. (This goes back to the Greeks; drama was the Thing, and comedy was a lower art form, though I actually think good comedy is harder to write.) The thing is, I feel like I deal with enough in real life, and I'm well aware I have it relatively easy, and I know there's terrible things out there, and I don't want to put myself through fictional misery too. For some people it can be cathartic, but for me, it keeps me up at night for days and causes me to feel anxious and miserable and sad. I just get far, far too attached, far too emotionally invested even though I know it's fiction. I find plenty of excellent, brilliant, beautiful literature that doesn't make me feel like hell and I still manage to be pretty well-informed and well-read.

Then I read Darla's blog entry and felt better, because apparently I am not alone in being adversely affected by books. What Darla is talking about there is a little different; I didn't feel terribly manipulated here, just in shock. But much of it is applicable, I just think my threshold is even lower than Darla's...
Posted by Unknown at 8:19 AM

I read this book years ago, and have only vague memories of it. I think I'd read it hoping for space adventures along the lines of Bujold's Vorkosigan books or, as you mention, Anne McCaffrey's, but the series missed that mark for me. I remember it as being rather too military and realistic than I'd bargained for, although I have no specific recollection of the end of the book. The series is incredibly popular at my library, though.

It is quite realistic in a lot of ways. I think part of the reason I expected something different is that Honor has a empathic animal companion, which I don't tend to associate with realistic military SF. Appearances: deceiving.