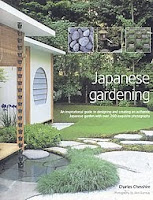 Japanese Gardening
by Charles Chesshire, photos by Alex Ramsay
Aquamarine, 2006
160 pages
It must be late January. Every year, like clockwork, the seed catalogues come and we have a few gorgeous, somewhat warm sunny days (which soon tilt back into frigidly appropriate dead-of-winter temperatures), and I start to feel the draw of the garden again. January is far too early to start planting even the earliest seeds indoors around here. I've got at least until mid-March before I dare to attempt that. So the next best thing is garden books, and I expect there will be a smattering of them from here on out until I'm actually out in the garden in the sun and soil.
I've always really liked the traditional Japanese garden ethic. I didn't know anything about it, really, except that there is something I appreciate instinctively about it. So this book, with its absolutely gorgeous cover and beginner attitude, appealed to me strongly when it came back across the desk.
Having not read any Japanese gardening books before, this appears to me to be a good entry into the aesthetic. It's very basic in some ways, although it's not at all a basic gardening book. There is an understanding that you, as a reader, have gardened before in a Western style, probably for a while, and are now turning your sights towards designing a Japanese-style garden. It's hard to say whether or not it fulfills its purpose, as I don't have the kind of space, time, or (most important) restraint to implement almost any of the ideas in this book. Generally, these are big gardens for big properties, and only a very few ideas for smaller gardens were briefly touched on. Which in a way is odd, because it's not like most Japanese gardeners have acres of space to play with.
As garden porn, it fulfills its purpose -- the photos are beautiful, and the layout of the book itself is very pretty. As garden erotica, perhaps not so much -- I was left wanting quite a lot more. I was lead to believe, for example, that there would be some discussion of contemporary Japanese gardening, and there were perhaps one or two glancing blows, mostly in captions of photographs. Along the same lines, there were sometimes photographs that were very incompletely explained; one caption discusses a photograph of a "bandaged" pine, which was probably very symbolic and/or functional, but there was nothing at all in the text to explain anything about it.
Done well, on the other hand, was a good chronology of design styles and a good explanation of design influences through history. It wasn't in-depth, but it was good enough that I now know I want to know more, and could at least name and explain a little bit about the four traditional Japanese garden styles and where they came from. Also, while Chesshire explains the design ethic, he touches often on the fact that to really understand the Japanese garden, one needs to understand the spiritual influences and not just the hard design. I think that's probably very important for Western gardeners to at least acknowledge as a major part of a Japanese garden, when attempting to design one of their own; Chesshire feels the same.
Also good were the glossary and plant lists. The bibliography was very small, which was a bit of a disappointment.
Overall, far too brief, I think, but nice to look at and a fine entry point for someone interested but not committed to the traditional Japanese garden. It was enough for me to recognize that while I appreciate the ideas, they really won't work for me. Not at this point in my gardening life, anyways. I don't have enough restraint. I love my flowers and my colours and my scents. The search for my own garden design ethic continues...
Posted by Unknown at 9:08 AM

Dear Kiirstin, thanks for your kind remarks about our book! You might also be interested in a more recent book on the same subject, 'The Gardens of Japan' by Helena Attlee and myself (published 2010 by Frances Lincoln Ltd).