I may have a spate of book club reads coming up here, but I make no promises. Many of my book club reads over the past two months have been getting cursory glances, a scan-through, a detailed reading of first, middle and end chapters at best. At worst (oh, the shame) I've been reading Wikipedia summaries. If any members of my three library book clubs read this blog, I'm sorry: now you know the truth. It's not that I don't want to read the books we've chosen, it's that my reading attention span has been so limited lately that I've had to go for the books I'm in sweet love with, not the books that I think are probably quite interesting and good.
But a change is in the wind, I feel it, with The Hunchback Assignments by Arthur Slade coming up for my 9 - 12s, and Owls in the Family by Farley Mowat for my parent-child group, and I'm even really quite keen to get started on Skinny Dip by Carl Hiaasen for my adult genre book club. 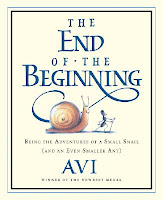 The End of the Beginning
by Avi
Harcourt, 2004
143 pages
And then, as a prelude to spring, I jumped ahead and read The End of the Beginning by Avi, which is my parent-child group's March read. This may prove to have been folly, as I'm not likely to remember everything I need to for an in-depth discussion with razor-sharp children, but there we go -- it's read and out of the way. And it was a charming little detour.
Avon Snail reads a book a day, and becomes quite depressed because he is sure he will never have adventures like the ones he reads about. A gentle prod from a passing newt encourages Avon to begin his adventure as soon as possible, and as Avon is leaving, he encounters a chatty ant named Edward. The two become fast friends and set out together. This little book is an exercise in realizing that everything can be an adventure if one has the right mindset, that endings are just beginnings, and heroes and heroics come in many different shapes and sizes. It's also full of plays on words, simple but profound little philosophical nuggets, and silly advice that shouldn't work but somehow does.
I'm really looking forward to discussing this one with the kids. I rather wish I had one to read it to (or to read it to me, as I know some of the kids in the group do with their parents). I am sure that they're going to get different things out of it than I have, and that they're going to have strong opinions on Avon and Edward and the experiences the two have. This is a book that is best discussed. As a read-aloud, I think it would be superior, and delightful. The illustrations throughout are whimsical and lovely, accompanying the whimsy in the text perfectly.
As a read-to-my-adult-self, it is charming. It occasionally slips past charming into too twee, but one might expect that from a book subtitled "Being the Adventures of a Small Snail (and an Even Smaller Ant)" and I was in the mood for twee. It is not long, and any longer would be too long. A larger flaw, from my perspective, is that neither of the characters seem to grow or change fundamentally from their experience, which is a bit of a surprise in a book that is a gentle parody of the heroic journey. That said, I think it must be purposeful -- Edward never gets his comeuppance, really, and Avon doesn't seem to learn anything -- so that the reader can notice this and think about it and discuss the dissonance. Because I certainly expected Edward (who is a great little character, flawed and bossy and daft) to get a comeuppance at some point, and I expected Avon to learn a little something. But they're both as bright as a sack of doorknobs, and that doesn't change. Edward even has a bit of a selfishly mean streak, to match Avon's selflessly kind streak, but nothing ever comes of it in the story, which is where I think discussion comes in.
So, yes. Overall, as a read for an adult -- perhaps not my first choice. But as something to read and discuss with kids who are reading about others' adventures, and thinking about the meaning of life and friendship and starting to figure things out, I think this is a great little story in the grand tradition of animal fables. The language is something that early readers will be able to understand and the chapters are short. The humour will definitely appeal to kids' sense of the absurd (a worm who can't figure out which end is head and which is tail, or a cricket who sings to himself about cheese), and some of the jokes that will be above their heads will be easily explained by a parent. I am looking forward to hearing about what the group has to say.
Posted by Unknown at 10:24 PM

This sounds wonderful! I remember reading some Avi when I was in grade school, and liking it (and I thought he was so cool having just one name). This sounds different from his other books, which I like.

Aarti, I have to admit this is the first Avi I've ever read. We have a lot of his books at the library, and after this I can totally see picking some others up. Just his use of language and imagination is enough to encourage me, even if this is totally different from his others.