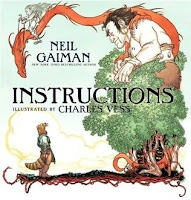 It's probably too rarely that I review children's picture books here (um, I think I have done it once before). Being a librarian whose primary duty involves working with kids (of all ages, mind) I think I probably should be reviewing more children's books. I tend to have my favourites, the ones I recommend all the time, but I haven't even mentioned those here, either. I'll get to that.

This picture book confounds me, because I'm not sure who to recommend it to. I know that as a child I would have loved it, and I love it even more now as an adult. But I also know that there are a lot of kids (and adults) who won't find Instructions particularly captivating. It's going to be one of those books that I will feel the need to know the child extremely well before I recommend it to them. One of my co-workers and I were having a discussion about the fact that there seem to be two different kinds of children's picture books. There are those that are perfect for reading aloud, for engaging a child in a story, for going through with a group of restless children or for reading together before bedtime. And then there are the picture books that will captivate a child if they read the book at just the right time, where reading the book is a solitary pursuit, where they can stare at the pictures for as long as they want and wonder and create stories in their head, where they can savour the feel of the words on their tongue as they whisper them to themselves. The second type of picture book is the one that really opens a child's imagination up, where they feel let into a secret, amazing world where anything can happen. I think there's an absolute need for both types of books in a child's life, even though the second type can be much harder to choose for a kid because they are so much more personal than the first type.

For the child that I was, Instructions would have been just the right second type for me. The narrative, such as it is, is open and leads to more questions than answers; it reads like a poem, though it doesn't rhyme at all. It is also a little book that will mean more to older readers who understand the conventions of fairy and folktales -- which, by the time they will be able to read this book to themselves, they almost certainly will be. The illustrations by Charles Vess are stunning and intricate, providing ample fodder for fertile imaginations. They are muted and cool, unlike a lot of the picture books being published right now, which gives the whole book a slightly anachronistic feel. It reminds me very much of a nursery rhyme and children's tale omnibus I had when I was very small.

Actually, now, I said that children who can read this and have an understanding of fairy and folktales will appreciate this more, but I recall sitting with that omnibus and just drinking the pictures in, before and even after I could read the stories that went along with the illustrations. This is a book that encourages that sort of thing. So perhaps what I mean to say is that I think anyone, young or old, reader or not, can love something about this book, if they're the sort of person who believes in mystery and imagination and hidden doors and faraway lands and wishing wells.

I think it's because of this muted style that I worry about whether anyone will take this book off the shelf, competing as it is with brighter colours and bolder lines. I often do displays, and this one will make it onto every fairy and folktale display I do from now on, which always helps. While I imagine Neil Gaiman can read this aloud to whomever he wants and it would be wonderful, I don't think this would make a great read-aloud for me except perhaps to a specialized group (a colleague did a "real nursery rhymes and fairytales" discussion group with 9 - 12 year olds -- I would read this to them in a heartbeat, for example.) All that said, I haven't tried yet and I'm thinking I might. I do think, however, that this would make a wonderful keeper, a book to read at bedtime to the right child, and one to leave for them on their shelf so that they can pick it up and drink it in whenever they need to travel away for awhile.
Posted by Unknown at 5:27 PM

I have this one, and I love it. It too was the book for me when I was growing up. When my daughter is old enough, I hope she will enjoy it as much as I do.

(Have you seen Blueberry Girl? Also by Neil and Charles. At http://www.youtube.com/watch?v=QH4lyJWa_84)

Hi Icy, welcome! Yes, I have seen it -- it's lovely, isn't it? I picked it up when it first came out. I think it's also one of those books that fits into my second category.

I gave this to my niece when she graduated from college last month, along with Oh, The Places You'll Go by Dr. Seuss and a more serious gift. Seemed like good advice to someone setting out in life.
Kathryn

What a lovely gift! I think this is perfect, you're right. Thanks for dropping by!

"So perhaps what I mean to say is that I think anyone, young or old, reader or not, can love something about this book, if they're the sort of person who believes in mystery and imagination and hidden doors and faraway lands and wishing wells."

I love this. As a certain famous author once said, fascinating pondering ;)

I said: I am still reeling a little from that whole episode. Not in a bad way, more in a delighted way. I'm glad you enjoyed my pondering, too. This book made me think about how much you would enjoy it, actually. :)

I just got a copy of this book and agree with everything you pondered. The illustrations are rich and detailed in a way that made me want to spend time with each page, drinking in the whole scene. I think it is a terrific book for bedtime stories with a lap and cuddly blanket. Maybe some hot chocolate too...