Alcatraz Versus the Evil Librarians by Brandon Sanderson 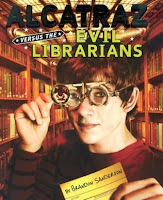 I went out to lunch and ended up home with a brutal stomachache. Like, writhing around on the bed, sweating and whimpering. Constant low level pain I can deal with but the big stuff turns me into a lame wuss.

So, what did I do to distract myself from the pain? I read, of course. I read a lot. I read an entire book. It wasn't hard to do, because Alcatraz Versus the Evil Librarians is an excellent book to distract from pain without being something I had to concentrate hard on. Really, thanking the powers that be that I'd thought to bring home this book this weekend. It was perfect.

One of my librarian colleagues recommended this book to us during a children's programmer's meeting. She has good taste, and it definitely seemed like something I would find fun. A world controlled by evil Librarians? The library as the centre of evildoing in their nefarious plot to make the world a sane, organized and boring place? Yes! This is my kind of dystopia. Just let me practice my evil laugh.

Alcatraz Smedry is thirteen years old when he receives his inheritance from his absent parents: a bag of sand. That same day, he sets his foster parents' kitchen on fire. The next day, that bag of sand is stolen, an insane man shows up claiming to be his grandfather, and someone tries to shoot him in the burned kitchen. It turns out that sand was pretty important in the fight against the evil Librarians -- and Alcatraz must infiltrate the library with a band of very random characters (one is always late, one totes uzis in a duffle bag, another speaks gibberish when necessary and sometimes when not, and a third is a very unconventional sort of knight) to get the sand back.

I did really enjoy this book. It's quite diverting. It's a very fast read, too. The style of narration, however, may put some people off. Alcatraz tells us this story, and he talks directly to the reader, spending a lot of time trying to convince the reader that he's not a very good person at all, and also that this is a true story -- the true story, in fact, and the only one worth reading. He also breaks in a lot with wry comments on being an author, narrative structure, and explicit exposition. Given my aversion to forebludgeoning, I should have hated this book. And to be honest, I can't quite explain why I didn't. I usually find self-conscious narrators, especially self-effacing ones, irritating and very contrived (see: how much I hated Snicket's The Bad Beginning, although there were lots of other reasons for that too). I really liked Alcatraz, and though the chatty and "I'm not good, believe me, and you know that things are just going to go bad" narration occasionally made me roll my eyes, and seemed a bit too much, it never turned me off. Part of this may have been that I was desperate for something to concentrate on, but I think it is in large part due to some trick Sanderson (or should I say Smedry?) has up his authorly sleeve. I wasn't in much of a mood to analyse further.

Another thing I thoroughly enjoyed, as befits a book about librarians and libraries, were the sly little references to other books. Some of these references will go over the target audience's head (not too many 10-13 year old boys have read To Kill A Mockingbird, I suspect, but maybe I am wrong) but some of them will not be lost. There is one totally awesome Harry Potter smackdown at the end that made me laugh out loud, particularly because there were some unavoidable parallels to be made between the two heroes. If you didn't like Harry, though, you might still be up for Alcatraz. He manages to be sarcastic, full of himself, and yet strangely endearing all at once.

The third book in this series has just recently come out, and I'll be pushing this series a little harder at the desk (despite what Alcatraz suggests I might do instead, as a librarian -- take that, Smedry!) Particularly for boys in the above age group, but I'll recommend it for the right kinds of adults, too, and you likely know who you are. Sanderson is clearly multi-talented, being the chosen author to finish off Robert Jordan's mammoth Wheel of Time series, and also the author of the fantasy Mistborn series, which is also on my list to try. You can be sure I'm going to move that one up the queue a bit.

Now if you'll excuse me, I should go and make some plans for world domination.

EDIT: Another dastardly librarian reviewed this book on her blog the very same day I did! Coincidence? I think not.
Posted by Unknown at 8:05 AM

But don't you get the feeling that, as we push this book to kids at the reference desk, just by shelving it in fiction we are advancing the dastardly librarian-led plot? :-D

Oh, whew! I feel a bit better now. I was worried that I was failing my fellow librarians, but you're right. I can get kids to read this book and still be evil.