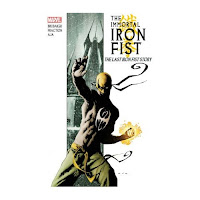 As mentioned previously, I've been attempting to broaden my horizons. I've always liked the idea of superhero comics, but I've never read many myself. And those that I have, I've never started in a good place where I can actually understand the story. Superhero comics are full of in-jokes and wink-wink-nudge-nudge to longtime fans, and therefore can be either intimidating or irritating, or in the worst case, both. The series can be long and there's an assumption of knowledge of backstory. And there is almost always a hell of a lot of backstory. Some of it is canon. Some of it is not. There are many people who can keep it all straight in their heads -- I am not one of them.

I ordered The Last Iron Fist Story from the library based on a review at Tor (this time, not Jo Walton!). I thought -- okay. Honouring backstory, but reinventing -- maybe I can get behind this. I will be the first to admit, before we go further, I really don't know anything about comic conventions in general or the Iron Fist in particular. This is a twenty-something trying to get into comics for the first time. So if I state the obvious or make mistakes, bear with me.

At first I doubted myself. There were characters that were clearly old favourites introduced with nothing but pictures. But I forged on. And those people were gradually introduced to me, without painful or clumsy exposition passages. The storytelling is actually fairly subtle, which I didn't expect -- the action, on the other hand, is not. The reader is steeped in this dark, gritty world from beginning to end. And at the end of the volume (collecting #1-6 of The Immortal Iron Fist, apparently) I found myself invested in what happens to Danny Rand aka Iron Fist as he heads off to what promises to be an action-packed interdimensional kung-fu tournament.

Danny Rand is the latest in a long line of heroes to hold the title of Iron Fist (this is complicated -- read the Tor article for a better explanation than I can give), and he's also an extremely wealthy and very bored CEO of a powerful holdings company (and it builds fast trains!) called Rand Corp. As we come in, he's investigating what appears to be a shady corporation looking to buy some of Rand's technology. Things balloon quite quickly from there. It's not always obvious what the hell is going on, but it actually tends to fit together quite neatly if the reader is a little patient. Re-readings are rewarded. There are subplots involving Danny's status as an unregistered superhero; an ex(?)-lover and some of Danny's superhero friends; and the man who runs Rand Corp. for Danny; any of those subplots could (and likely will) be developed into main plots in further installments.

Overall, I enjoyed my foray into superhero comics. I think I'll try to continue to follow this series, at least, as it continues in a volume called The Seven Capital Cities of Heaven. I don't know, to be honest, that I'll go out of my way to pick up any other comic books, but at least now I have a better idea of what people see in them.
Posted by Unknown at 11:56 AM